US Ambassador: We are doing everything we can at the highest level to  prevent the use of force 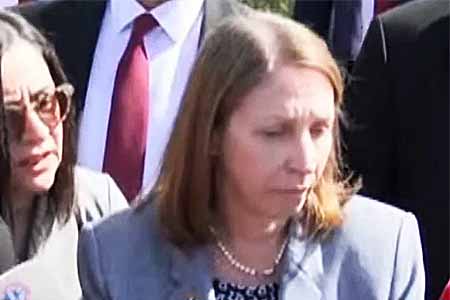 ArmInfo.On September 27, Syunik Region Governor Robert Ghukasyan received US Ambassador to Armenia Lynne Tracy. This was reported by the regional administration  of Syunik.

During the meeting, Robert Ghukasyan, presenting the details of the  invasion of Azerbaijani Syunik on September 13, pointed out the  importance of the fact that during this difficult period, the  American diplomat was by the side of the Armenian people. <We know  your position, and the position of the United States in relation to  all this, for which we are grateful to you. But the last two-day war  on the sovereign territory of the Republic of Armenia showed that the  enemy not only violated the fundamental rights of another state and  all human rights, but even targeted ambulances. <People here do not  want to leave their settlements, which increases the risk of military  operations against civilians. The international community should give  an appropriate assessment to all of this, so once again we ask  everyone to pay attention to the recent actions of the enemy and put  clear pressure on him to prevent their repetition.

Lynne Tracy, in turn, noted that the conflict between Armenia and  Azerbaijan is the focus of the United States, although there are  parallel conflicts in the wider region as well. "We are doing  everything  we can at the highest level, including through diplomatic  channels, to prevent the use of force, ensure the continuity of  negotiations and have the prospect of a settlement of the problem  that will bring long-term and stable peace," the diplomat said.

She noted that she understands how difficult it is now for the  residents of Syunik, as well as other border regions. That is why she  visited the region with her partners to understand what is happening  and how they can help.

Robert Ghukasyan discussed with the guests a number of issues that  have arisen in the context of the developments taking place around  the region, and also thanked the US Agency for International  Development for the work done so far, noting that projects with  continued cooperation should be aimed not only at development, but  also at solving problems in difficult situations.

Lynne Tracy, who is completing her diplomatic mission in Armenia,  said: "The situation in Syunik, in Armenia as a whole, will always be  on my mind, and if I can do something to bring peace here, I will do  it in the future, regardless of where I will be.