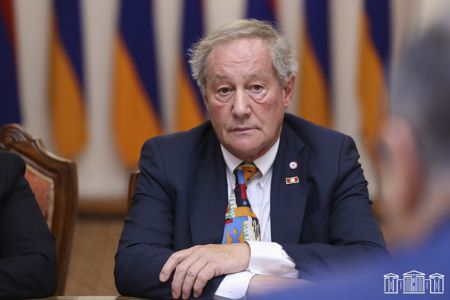 ArmInfo.France will continue to support Armenia, as well as assist the processes aimed at achieving peace. Gilbert-Luc Devinaz, chairman of the France-Armenia  Friendship Group of the French Senate, stated this during a meeting  with Armenian President Vahagn Khachaturyan.

During the meeting with the President, members of the France-Armenia  Friendship Group noted the importance of programs to ensure stability  and peace in the region, as well as to expand relations in various  areas, the press service of the presidential administration reports.  They noted with satisfaction that even in the difficult situation  created after the war, Armenia continues to adhere to the fundamental  principles of democracy.

In turn, President Khachaturyan highly appreciated France's targeted  statements about the Azerbaijani attack on the sovereign territory of  Armenia on September 13, as well as during the 44-day Artsakh war,  and in the post-war period as well. At the same time, he highly  appreciated the contribution of France and its active efforts to  initiate a meeting of the UN Security Council.