The first president of Armenia did not change his approaches -  Oppositionist 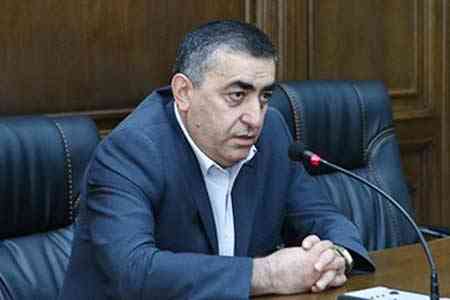 ArmInfo.The first president of Armenia, Levon Ter- Petrosyan, did not change his  approach, calling on the people to capitulate. Armen Rustamyan,  member of the RA National Assembly from the "Armenia" opposition  faction, member of the ARF "Dashnaktsutyun" party, stated this to  journalists on September 27.

According to him, everyone should speak out on the issue of state  security, and Levon Ter-Petrosyan is no exception, despite the fact  that there is nothing new in his statements. "In any case, experience  shows that our people must be united, in fact, what the first  president himself says. The second part of his speech is  incomprehensible, according to which the authorities and the  opposition should enter into a dialogue. The question arises: the  dialogue around what? Unfortunately, Levon Ter-Petrosyan bypassed  this issue," the MP noted, adding that negotiations with Prime  Minister Nikol Pashinyan would lead to the same result as the first  president says, namely, to capitulation, since according to Ter -  Petrosyan, this  is inevitable if we want to live in Armenia.  Rustamyan stressed that Levon Ter-Petrosyan has been talking about  the inevitability of this step since the 1990s. "One of his main  theses is that "our defense lies in our defenselessness. We've all  been through this, perhaps the current generation does not remember  all this.  With his statements, he tried to instill the idea that the  Armenian people are an incapable people," the MP noted.

Rustamyan also noted that the phrase "painful decisions" is  incomprehensible.  "If you are offered one of several options, this  is not your choice, this is their choice," Rustamyan said.  At the  same time, the MP welcomed the first meeting of the Catholicos of All  Armenians Garegin II with the ex-presidents of Armenia and Artsakh.  "With this meeting, they are obliged to prove that the people can  unite. If they fail to do so, we will face very serious problems, and  we must not let things come to this. "In the end, we must show that  our people have the ability to unite, which will lead to victory,"  Rustamyan emphasized.