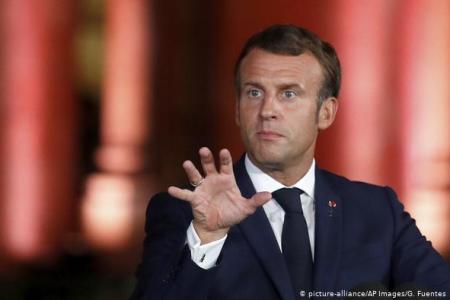 ArmInfo."France demanded that the Azerbaijani forces return to their initial positions. I told  President Aliyev on September 14 that the fact that the border is not  demarcated cannot justify any advance into the territory of the other  country," French President Emmanuel Macron stated at a news  conference following his meeting with Armenia's Premier Nikol  Pashinyan.

"In recent days, we [Macron and Pashinyan] have talked many times on  the phone, because Armenia is again suffering from the armed clashes  of September 13 and 14, and the situation is really critical.

"Large-scale military operations took place on the border of Armenia  and Azerbaijan, causing many casualties. The territory of Armenia was  targeted, civil infrastructures were destroyed. In the face of this  unacceptable situation, France has assumed its commitments.

"France, holding the presidency of the UN Security Council, convened  a meeting of the Security Council, where the situation was discussed  twice, on September 14 and 15. The Council members demanded a speedy  cessation of hostilities and respect for the ceasefire. Taking into  account that there are occupied positions, France demanded that the  Azerbaijani forces return to their initial positions. I told  President Aliyev on September 14 that the fact that the border is not  demarcated cannot justify any advance into the territory of the other  country.

"In addition, I have clearly stated since September 13 that France is  convinced that the use of force cannot be a solution for either  Armenia or Azerbaijan and it is necessary to resume the dialogue  immediately. All unresolved issues, which are numerous, should be  resolved exclusively through negotiations. The negotiations are held  in different formats, particularly under the auspices of the EU, and  they should be resumed.

"I do not forget that exactly two years ago, on September 27, 2020, a  terrible war began, which became deadly for the region. It led to a  de facto new situation with an expanded Russian military presence in  the region. And I strongly condemn what happened in recent days and  call for peace and resumption of negotiations. I would like to salute  the courage of Prime Minister Pashinyan, who proposed a new approach  for the future of the region.

"President Aliyev, with whom I will talk in the next few hours, says  that he also wants to end instability in the region and find  solutions. But it is impossible to build peace under the threat of  force. To that end, France will do everything, will pursue its goal,  which is a stable, safe and prosperous South Caucasus.

"In a few minutes, Prime Minister Pashinyan and I will discuss the  situation on the ground, as well as how to strengthen the ceasefire  to avoid a new escalation and resume negotiations. We will also touch  upon a number of issues to see how France, together with the European  Union and other partners, can contribute to sustainable peace. I am  talking about the delimitation of the border between Armenia and  Azerbaijan, we also talked about it in Brussels. We will also discuss  the actions of the UN and the OSCE.

"I know that the Prime Minister had important meetings in New York  within the framework of the UN General Assembly. We can talk about  that too. We will also refer to a very important issue: the issue of  normalization of relations between Armenia and Turkey. This is a  difficult but very necessary process and you know that France also  has assumed commitments over this issue. This process is extremely  important for the region.

"Finally, we will also discuss issues of bilateral relations. Thank  you, Mr. Prime Minister, for coming to Paris after your visit to New  York so that we could talk and discuss issues.

"Once again, I emphasize France's commitment to achieving peace and  stability for your country and the entire region. I salute your sense  of responsibility and your position to do everything to establish  peace. I want your country to have tranquil and peaceful borders."