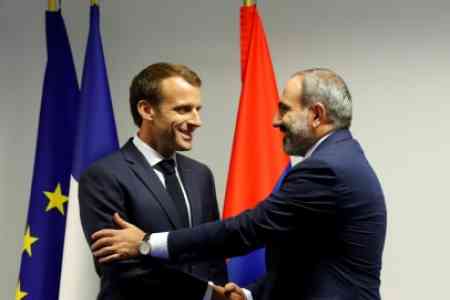 ArmInfo.The speculations that there is no precise border between Armenia and Azerbaijan,  because the border is not demarcated and delimited, have nothing to  do with reality, Armenia's Premier Nikol Pashinyan stated at a news  conference in Paris, on September 26.

The administrative borders between Soviet Armenia and Soviet  Azerbaijan became state borders in the first months of independence  of the two countries, since both Armenia and Azerbaijan signed and  ratified the December 8, 1991 Agreement on Establishing Commonwealth  of Independent States. Moreover, both countries are members of the  CIS until now.

"I want to emphasize that it is an integral part of this agreement  that the administrative borders, the existing borders basically  become state borders and the countries that joined the agreement  recognize these borders," Mr Pashinyan said.

As a result of the aggressions of May 12, 2021 and September 13,  2022, Azerbaijan has occupied the sovereign territories of the  Republic of Armenia.

"I referred to that topic in detail in my speech at the 77th session  of the UN General Assembly. I would like to emphasize that our  position is unequivocal: the Azerbaijani armed forces must withdraw  from the sovereign territory of Armenia, and I want to thank France,  personally President Macron, for recording this position," Armenia's  premier said.

"I think that sending an international observation mission to the  regions affected by the Azerbaijani occupation and the border zone  will help the international community to receive direct and not  mediated information, and will also become an important factor in  stabilizing the situation," Mr Pashinyan said.  "I am convinced that  the UN Security Council should also keep the issue in the focus, and  I expect the support of the country holding the presidency on this  matter.

"Coming to long-term solutions, I think it is necessary to sign the  Armenia-Azerbaijan peace treaty with the mutual recognition of the  borders reaffirmed by the agreement of December 8, 1991. Armenia is  ready for the opening of communications in the region and the  construction of new communications, in accordance with the national  legislation of the countries through which they pass.

"As for long-term solutions, I think it is necessary to sign the  Armenia-Azerbaijan peace treaty with the mutual recognition of the  borders reaffirmed by the agreement of December 8, 1991. Armenia is  ready for the opening of communications and the construction of new  communication routes in the region, in accordance with the national  legislations of the countries through which they pass.

"We also attach importance to the settlement of the Nagorno-Karabakh  issue, which will guarantee the rights and security of the Armenians  of Nagorno-Karabakh. I think the start of Azerbaijan-Nagorno Karabakh  discussions can be useful. In this context, I must emphasize the role  of France as OSCE Co-chair country," stated Armenia's premier.