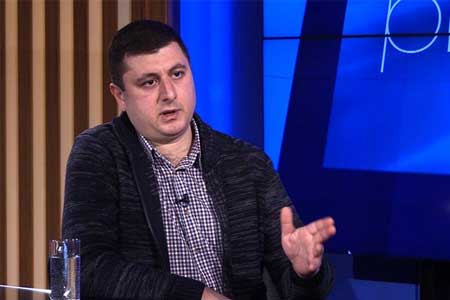 ArmInfo.Armenian Premier Nikol Pashinyan's speech at the 77th session of the U.N. General Assembly showed that Azerbaijan is now laying wider territorial  claims, and the problem is not only the corridor and so-called  enclaves, to say nothing of Artsakh, Tigran Abrahamyan, a member of  the With Honor parliamentary faction, wrote.

According to him, in his speech Armenia's premier actually put  Armenia's sovereign territory up for sale, offering Azerbaijani  President Illham Aliyev to submit a full list of his territorial  claims on Armenia.

"With its era of war this government has brought the country to the  point of no choice for the Armenian people, and we are witnessing an  existential struggle between concessions, which will cause  irreparable damage to Armenia's resilience, and a new devastating  war," Mr Abrahamyan wrote.

Former vice-speaker of Armenia's Parliament Eduard Sharmazanov  pointed out the fact Armenia's premier did not say a single word  about Artsakh's independence.

"Not a single word about the occupation of most of Artsakh, Shushi  and Hadrut. Not a single word about the right to self-determination  and fundamental principles. He literally said: 29,800 square  kilometers," the opposition member said, accusing the premier of  "washing his hands" of the other problems of Armenia and Artsakh amid  Azerbaijan's creeping aggression.

Political scientist Suren Sargsyan says Armenia's premier admits  three important facts: "The authorities' 'era of peace' concept was a  stillbirth. The authorities failed the organization of Armenia's  defense, diplomacy and the negotiation process. The rest ensued from  that reality," he said.

In his speech at the 77th session of the U.N. General Assembly,  Armenia premier recalled Azerbaijan's military aggression against  Armenia amid international partners' silence. Azerbaijan is  attempting to use border delimitation process for its new territorial  claims on Armenia. Speaking of a comprehensive settlement of the  Nagorno-Karabakh conflict, Mr Pashinyan did not mention the right to  self-determination, speaking of guarantees of "the rights and the  security of the Armenians living in Nargorno-Karabakh."