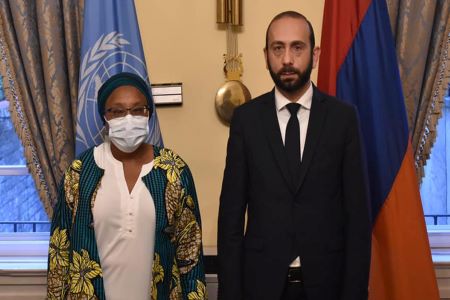 On September 21, within the framework of the 77th session of the UN  General Assembly, Foreign Minister of Armenia Ararat Mirzoyan had a  meeting with USAID Administrator Samantha Power.

The interlocutors commended the consistent development of the  Armenian-U.S. relations based on common democratic values, which  enriches the bilateral agenda with a new content. Minister Mirzoyan  reiterated the commitment of the Government of Armenia to democracy  and the protection of human rights and its readiness to continue the  reform agenda.

Minister Mirzoyan and Samantha Power touched upon the projects  implemented by USAID in Armenia, and exchanged views on the prospects  of implementing new joint programs. The importance of the joint work  carried out for the reform agenda of the Government of Armenia, the  institutional capacity building in Armenia, as well as the further  deepening and expansion of cooperation in these directions was  highlighted.

During the meeting, the Foreign Minister briefed upon the recent  aggression unleashed by Azerbaijan against the territorial integrity  of the Republic of Armenia and the subsequent situation.

In the context of countering the maximalist and aggressive behavior  of Azerbaijan, the role of targeted condemnation of Azerbaijani  aggression by the international community as well as the importance  of taking efficient steps towards preventing potential aggressions in  the future were emphasized. Ararat Mirzoyan also stressed that the  Republic of Armenia will continue to defend its sovereignty and  territorial integrity.

On September 21, on the margins of the 77th session of the UN General  Assembly, Minister of Foreign Affairs of Armenia Ararat Mirzoyan met  with the Secretary General of the Council of Europe, Marija  Pejcinovic Buric.

Ararat Mirzoyan briefed his counterpart on the details of the  aggression unleashed by Azerbaijan against the sovereign territory of  the Republic of Armenia, considering unacceptable the cases of  deliberate targeting of the civilian population and infrastructure,  inhumane treatment and torture of Armenian servicemen and prisoners  of war by the Azerbaijani armed forces.

The Minister of Foreign Affairs of Armenia noted that such actions of  Azerbaijan are a blatant disregard of the fundamental norms of  international law and the obligations undertaken by the member states  within the framework of the Council of Europe and should have  appropriate consequences.

The Armenian side emphasized the necessity of preserving the  territorial integrity of the Republic of Armenia, the return of the  Azerbaijani troops to their initial positions, the immediate  repatriation of the Armenian prisoners of war, as well as the  restoration of stability and peace in the region.

Ararat Mirzoyan highlighted the importance of ensuring uninterrupted  access of international organizations to Nagorno-Karabakh. The  Minister also expressed hope that the Council of Europe will be more  firm and consistent in protecting the fundamental rights of the  people of Artsakh.

Both sides emphasized the continuous reform process implemented in  Armenia within the framework of Armenia-CoE cooperation.

Presenting the details of military aggression of Azerbaijan against  the territorial integrity of Armenia since September 13, the Minister  of Foreign Affairs of Armenia particularly emphasized the need of  eliminating its consequences and the international community's  targeted and adequate response to the aggressor country, as well as  the necessity of restraining the maximalist and aggressive policy  pursued by Azerbaijan.  The urgency of an appropriate assessment to  the war crimes committed by the armed forces of Azerbaijan, in  particular, the cases of inhumane treatment of servicewomen, was also  emphasized.

The parties touched upon the agenda of Armenian-Swedish bilateral  relations, expressing readiness to undertake active steps towards  further expansion and development of cooperation. The deepening of  collaboration in the sphere of strengthening democratic institutions  in Armenia was highlighted. Thoughts were also exchanged on  cooperation on international platforms and Armenia-EU partnership.   On September 21, within the framework of the 77th session of the UN  General Assembly, Minister of Foreign Affairs of Armenia Ararat  Mirzoyan had a meeting in New York with Alice Wairimu Nderitu, the  Special Advisor of the UN Secretary-General on Genocide Prevention.

Ararat Mirzoyan and Alice Wairimu Nderitu commended the close  cooperation with regards to the promotion of the genocide prevention  agenda and the fight against xenophobia and discrimination. Minister  Mirzoyan emphasized the importance of the special adviser's mandate  and expressed readiness to continue effective cooperation under it.

The interlocutors exchanged views on the role of high technologies in  the prevention of genocides and crimes against humanity.

Touching upon the situation resulting from the military aggression  unleashed by the Azerbaijani armed forces against the sovereign  territory of Armenia, Minister Mirzoyan drew the interlocutor's  attention to the continuous gross violations of international and  humanitarian law by Azerbaijan. The Minister stressed the importance  of the international community's targeted response to these crimes  and the strengthening of prevention mechanisms.