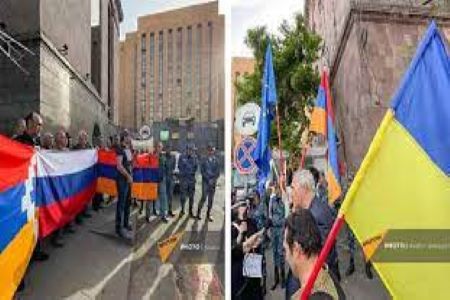 The protest in Yerevan's Liberty Square was attended by around 1,000  people, who demanded the withdrawal of the Russian military base from  Armenia and Armenia's secession from the CSTO. The organizers assured  the participants that only after making relevant steps can Armenia  rely on U.S. military aid and hope for restoring its sovereignty.

Armenia's incumbent authorities are following a course of choice  "between the Turkish yataghan and the Russian heel." So Armenia  should leave the CSTO and join civilized Europe.

The protesters marched toward the Russian Embassy in Yerevan to voice  their support for Ukraine and decry Russian's actions in Ukraine.

This is the second protest organized by the NDA to demand Armenia's  secession from the CSTO.