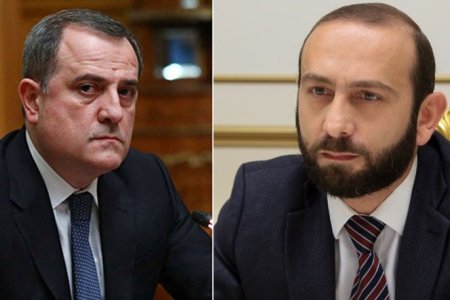 ArmInfo. U.S. Secretary of State Antony Blinken hosted talks between Armenia's and Azerbaijan's foreign ministers in New York late on Monday one week after the  outbreak of fighting on the Armenian-Azerbaijani border which left at  least 280 soldiers from both sides dead, Azatutyun reports.

No concrete agreements were announced immediately after the talks  held on the sidelines of an annual session of the UN General  Assembly.

"We are encouraged by the fact that the fighting has ceased and there  have not been any additional military actions over the last few  days," Blinken said in his opening remarks at the talks. He said both  Aliyev and Pashinian assured him that they are "ready for peace."

"Strong, sustainable diplomatic engagement is the best path for  everyone. There is no military solution to the differences between  Armenia and Azerbaijan," added the top U.S. diplomat.

In a statement on the New York meeting, the Armenian Foreign Ministry  said Foreign Minister Ararat Mirzoyan demanded the withdrawal of  Azerbaijani troops from "the sovereign territory of Armenia" seized  by them during the latest fighting as well as in 2021.

At the same time, Mirzoyan "reaffirmed the Armenian side's readiness  to engage in a process of comprehensive normalization of relations"  between the two South Caucasus countries, said the statement. It did  not say whether he reached any understandings with Azerbaijani  Foreign Minister Jeyhun Bayramov.

Earlier on Monday, Armenia's Security Council insisted that  Azerbaijani forces attacked various sections of the border in a bid  to impose on Yerevan "solutions" sought by Baku. It said that Armenia  will not bow to Azerbaijan's "policy of threat and coercion."

"The Republic of Armenia will protect its independence, sovereignty,  and territorial integrity by all available means," read a statement  released by the council after a meeting chaired by Pashinian.

Mirzoyan claimed on September 14 that the opening of an  "exterritorial corridor" connecting Azerbaijan to its Nakhichevan  exclave is one of the key aims of the Azerbaijani "aggression." The  Armenian ambassador to the UN, Mher Margarian, claimed afterwards  that Baku is planning another, larger-scale attack on Armenia for  that purpose.