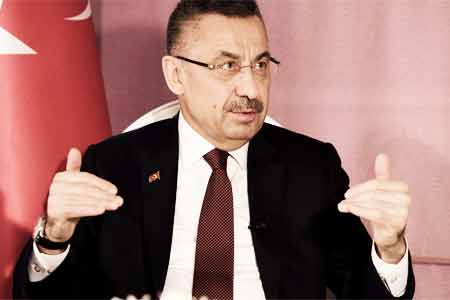 ArmInfo. Turkish Vice President Fuat Oktay criticized the statements made by Nancy Pelosi, Speaker of the House of Representatives of the US Congress, during  her visit to Armenia.

Oktay assured that Nancy Pelosi's words "have nothing to do with  historical facts, as well as the realities of today."

"The statements of the speaker of the US House of Representatives are  also far from the concepts of goodwill and objectivity. These  unacceptable statements sabotage diplomatic efforts in the region,"  Oktay wrote on Twitter.

The Turkish politician stressed that the US administration should  clearly state: do the statements of Pelosi and a number of  pro-Armenian politicians accompanying her reflect the official  position of Washington on the Karabakh issue?

"At a time when the South Caucasus needs peace and stability more  than ever, I call on international players to act with the utmost  deliberation and fairness, and above all, responsibly," the Turkish  Vice President wrote.

In conclusion, he expressed Turkey's full support for the occupation  rhetoric of Azerbaijan in relation to the sovereign territories of  Armenia.

The American speaker arrived in Armenia on September 17, along with  her arrived in Yerevan Chairman of the Committee on Energy and  Commerce of the US House of Representatives Frank Palone and members  of the House of Representatives Anna Eshu and Jackie Speyer. During  the visit, Pelosi held a briefing for journalists, where she accused  Azerbaijan of aggression against Armenia. Moreover, expressing  Washington's support for Yerevan, Pelosi stressed that the value and  importance of their visit also lies in hearing and understanding how  and what they can do in economic and security issues, what  expectations Armenia has.  According to her, this also applies to  issues of defense cooperation.