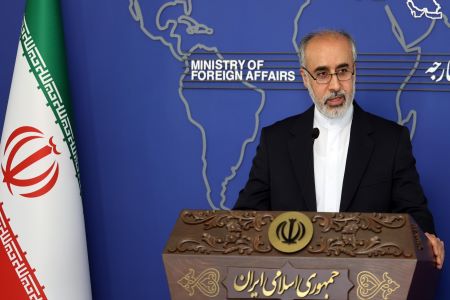 ArmInfo.The spokesman for Iran's Ministry of Foreign Affairs is his weekly presser on Monday stressed thta Tehran clearly believes that using political approaches  and solutions and political dialogue is necessary to resolve the  differences between the Azerbaijan Republic and Armenia.

Speaking at his weekly Presser on Monday, the spokesman for Iran's  Ministry of Foreign Affairs Nasser Kanaani Chafi considered the  political resolution of Republic of Azerbaijan and Armenia and using  the regional frame work together with the efforts made to achieve  good neighborliness policy. the bey way to solve the political crises  between Azerbaijan and Armenia.

The spokesperson of the Ministry of Foreign Affairs added: "The  Islamic Republic of Iran's clear position regarding the developments  in the South Caucasus region has been officially stated many times at  different levels and there is no ambiguity about it."

He further explained;" Unfortunately, since Tuesday of last week, we  witnessed the beginning of new border conflicts between the two  countries of the Republic of Azerbaijan and Armenia, which has led to  the death and injury of a large number of both sides."

Nasser Kanaani went on to say that based on the neighborhood policy  and trying to help constructively to resolve regional crises, Iran  started political efforts as soon as possible. In this connection,  the Prime Minister of Armenia had a conversation with the President  of Iran and the President expressed the views and positions of Iran  and conveyed his political recommendations to the Armenian side. Then  the Iranian Foreign Minister had a telephone conversation with his  Azerbaijani counterpart.

This senior diplomat of Iran noted: "Iran, like before, which had not  spared any help to end the conflicts since the beginning of the  crisis, acted quickly and tried to establish a ceasefire and return  peace to the borders of the two countries with diplomatic efforts. ":

He further said: "Iran's principled positions are clear and we  believe in the necessity of using political approaches and solutions  to end conflicts and reduce tension and enter into political  dialogues to resolve the differences between the two countries."

"Regarding the geopolitics of the region, Iran's policy is clear and  we believe that what can help to resolve these disputes is the  presence of political resolution in both countries to start dialogues  and the use of regional frameworks that will help to end the  conflicts and Iran based on the neighborhood policy and Friendly  relations with both sides are still ready to help end tensions and  resolve differences."