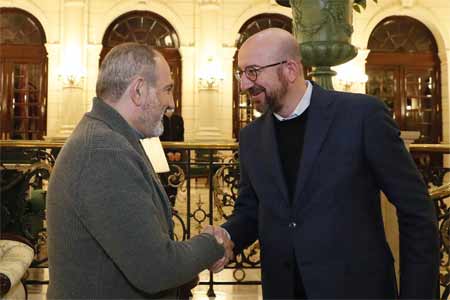 ArmInfo. On September 17, Armenian Prime Minister Nikol Pashinyan had a telephone conversation with President of the European Council Charles Michel. This was  reported by the press service of the RA government.  The Prime  Minister presented in detail the situation resulting from the  aggression of Azerbaijan against the sovereign territory of Armenia,  underlining the fact that the tension in the borders is maintained.

Charles Michel reaffirmed his readiness to promote dialogue and  peace.

Various issues related to the settlement of the situation were  discussed.

On September 13, Charles Michel expressed his concern about fighting  on the border between Armenia and Azerbaijan in his Twitte account.  "A complete and sustainable ceasefire is needed. There is no  alternative to peace and stability, and there is no alternative to  diplomacy to ensure that>, the head of the EU noted.

It should also be noted that four meetings of the leaders of Armenia  and Azerbaijan, Nikol Pashinyan and Ilham Aliyev, took place through  the mediation of Charles Michel.

From the night of September 13, the Azerbaijani Armed Forces targeted  the positions of the Armenian army, as well as peaceful settlements  in Syunik, Vayots Dzor and Gegharkunik to intensive artillery  shelling. The battles went on in different directions - Sotk,  Vardenis, Artanish, Goris, Kapan, Jermuk, Ishkhanasar. On the evening  of September 14, an agreement was reached on a ceasefire. According  to official preliminary data, the losses of the Armenian side  amounted to 135 people, but this figure is not final yet.