RA Ambassador to Germany: The situation can escalate at any moment 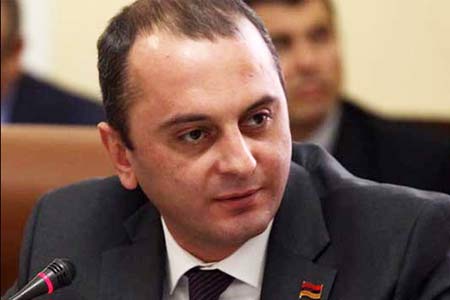 ArmInfo.Azerbaijan's aggression against Armenia is a challenge to international law.   Armenia's Ambassador Extraordinary and Plenipotentiary to Germany  Viktor Yengibaryan stated in an interview with Network Germany  (German:  RedaktionsNetzwerk Deutschland, RND).

According to him, this attack is not only against the internationally  recognized borders of Armenia, but is also a violation of the UN  Charter and the Helsinki Final Pact. Shelling with the use of  artillery, mortars and drones was carried out not only in the border  zone, but also in the vicinity of Armenian settlements and cities,  such as Sotk, Vardenis, Goris, Jermuk, Kapan, Artanish and  Ishkhanasar. , the diplomat stressed.

He noted that it is necessary to take active steps so that Azerbaijan  realizes that an attack on its neighbor cannot go unpunished.  Sanctions are also a means to achieve this. "We expect Azerbaijan to  stop the aggression against Armenia, return its troops to their  [initial] positions, that is, outside the country, and return to the  negotiating table," Yengibaryan stressed, adding that any statement  that equates the aggressor and the targeted side is < green light>  for the aggressor.

"The government of Armenia, which received a mandate as a result of  democratic elections, is making great efforts to find a peaceful  solution. We have actively demonstrated our readiness to open a  regional transport link between Azerbaijan and Turkey, but Azerbaijan  must also agree to open its own transport link to Russia and Iran via  Nakhichevan for Armenia.  We are also ready to set boundaries and  strive for a sustainable solution to all problems. Considering the  seriousness of the situation, the Republic of Armenia decided to use  all diplomatic means at its disposal to stop the Azerbaijani  aggression and return the Azerbaijani army to its initial positions.   Accordingly, Armenia turned to the Russian Federation, the CSTO  military bloc and the UN Security Council. Our government is also in  close contact with the US and the EU. Thanks to the active efforts of  our international partners, the ceasefire is now maintained, but the  situation can escalate at any moment, we have information that  Azerbaijan is preparing for new aggressions. Of course, we expect  that our Western partners will show maximum activity to establish  peace and security in our region," the Ambassador emphasized.