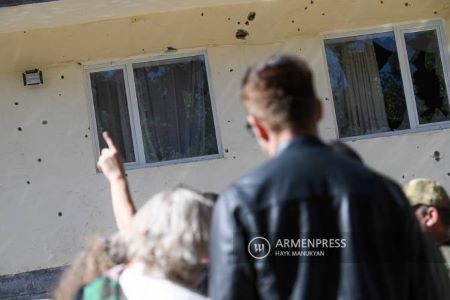 ArmInfo. Germany sympathizes with the Armenian people.  German Deputy Chief of  Mission, now Charge d'Affaires Erik Tintrup stated this after  visiting the resort town of Jermuk, which suffered as a result of  Azerbaijani aggression. Sharing his impressions after what he saw,  the diplomat stressed that he was extremely concerned about what had  happened.

Noting that Jermuk is  peaceful resort town located in a picturesque  corner, Tintrup said that there were also German tourists there on  Tuesday (September 13). "The fact that none of the residents were  killed is almost like a miracle, as the artillery shots were fired at  restaurants and the cable car [system] located kilometers from the  border, only a few hundred meters from residential buildings and  hotels full of tourists," Tintrup said. He also said that one of the  tourists from Germany took a photo of the moment of the explosion  from her hotel room. It should be noted that Erik Tintrup was one of  the 50 diplomats invited by the Armenian Foreign Ministry to a  briefing in Jermuk.