At Starmus festival in Armenia, 3 Stephen Hawking medals were awarded  for contribution to popularization of science through music, poetry  and cinema 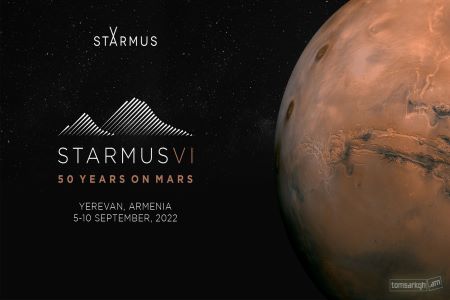 ArmInfo.On September 5, the opening ceremony of the Starmus world science and art festival, which this year was dedicated to the 50th anniversary of the first  mission to Mars , took place at the Karen Demirchyan Sports and  Concert Complex .

Thanks to the festival, more than 50 scientists visited Armenia,  including Nobel Prize winners, astronauts, artists and world-famous  musicians. The festival opened with a welcoming speech by Armenian  Prime Minister Nikol Pashinyan, followed by the ceremony of  presenting the Stephen Hawking Medal, which was awarded to the  guitarist of the legendary rock band Queen Brian May for his  contribution to the popularization of science. In addition to May,  American poet, non-fiction author, endangered naturalist Diane  Ackerman and primatologist, leading chimpanzee expert, author of more  than 40 films and Roots & Shoots conservation program Jane Goodall  were also awarded medals.

The Stephen Hawking Medal is an Oscar in science and was established  in London in 2015. A medal of this kind is awarded for works that  contribute to the advancement of scientific knowledge in various  fields, such as music, art, cinema. The medal features a portrait of  Stephen Hawking, which was painted by cosmonaut Alexei Leonov.

During the opening speech, Starmus co-founder Garik Israelyan noted  that the future of such small countries as Armenia is in the  development of science and technology. He stressed that many  countries of the world are rich in oil and gas, while Armenia is rich  in people.  According to him, the holding of such a global event in  Armenia contributed to the historically rich scientific heritage of  the country and is currently developing in this direction.

"The holding of such a festival as Starmus is a key moment in the  history of Armenia, which cannot but inspire a new generation of  scientists and cultural figures of this country",  the co-founder of  the Festival said.  Next, the guests of the festival were expected by  the concert program SONIC Universe, with the participation of  world-famous stars, including Brian May, Rick Wakeman, Serj Tankian,  Andrey Makarevich, Tigarn Hamasyan and others.

Next, the SONIC Universe concert program was planned, in which  world-famous stars Brian May, Rick Wakeman, Serj Tankian, Andrey  Makarevich, Tigarn Hamasyan and others will participate.

It should be noted that the festival program is quite intense. Every  day, in almost all educational institutions of the country, Nobel  laureates and cosmonauts, astronauts will hold open lectures and  share their knowledge and achievements with the Armenian youth.

Assistance was also provided by the FAST Foundation, the UN Armenian  Office, the National Academy of Sciences of the Republic of Armenia,  the A.I. Alikhanyan National Science Laboratory, Teach for Armenia  program, TUMO Center for Creative Technologies, Ayb School, etc. The  world's largest science popularization festival has been held since  2011. Prior to Armenia, the festival was organized in Tenerife,  Norway, Switzerland.

Astrophysicist Garik Israelyan and guitarist of the legendary band  Queen, astrophysicist Brian May, founded the STARMUS festival. The  festival brings together world-famous scientists, Nobel Prize  winners, thinkers, astronauts, scientists, culture and art. Within  the framework of the festival, scientists share their knowledge,  experience and latest discoveries with the public