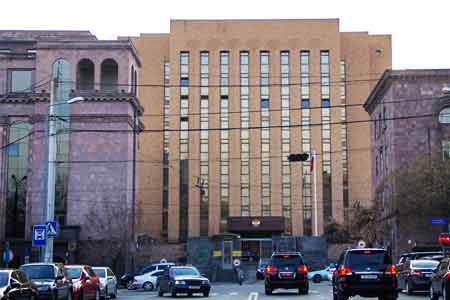 ArmInfo.Russia's Embassy in Armenia has issued a statement on Wednesday expressing indignation at the allegations that Russian structures were involved in the  explosion at Yerevan's Surmalu shopping center last Sunday, which  claimed 16 lives, leaving over 60 injured.

The statement posted on the embassy's Facebook page reads as follows:

"We are indignant with cynical information disseminated by local  media which contains accusations against Russian structures in  connection with the tragedy that occurred on August 14 this year at  the Surmalu shopping center.

"We consider such reports direct provocation by the political forces  behind these insinuations, aimed at undermining the Russian-Armenian  allied relations. We expect the Armenian authorities to take steps to  put an end to such unfriendly displays, including through public  comments.

"The Embassy has sent a relevant note to the Ministry of Foreign  Affairs of the Republic of Armenia.

"We should note that the Russian side, represented by the  Russian-Armenian Humanitarian Response Center, has been involved in  the search and rescue operations helping to deal with the aftermath  since the first moments after the tragedy."