There is no risk of a new explosion in the area of Surmalu shopping  center, but there may be a smoke effect- Deputy Minister 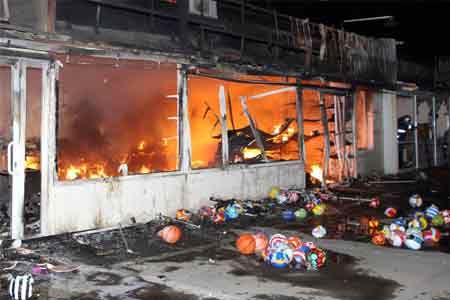 ArmInfo.There is no risk of a new explosion on the territory of the Surmalu shopping center, but there may be a some smoke effect in some areas. Deputy Minister of  Emergency Situations of Armenia David Hambaryan told journalists on  Tuesday.

The Deputy Minister stressed that at present there is evidence of the  bodies of two foreign citizens being under the rubble. Referring to  the inconsistency in the numbers of the  casualties , Hambaryan did  not rule out that there may be technical problems. In any case, he  called for the use of data that is periodically provided by the  Ministry of Emergency Situations. The Deputy Minister confirmed that  16 people are dead, the bodies of 14 of them have been identified,  one of them is a minor.

Hambaryan noted that it is still difficult to talk about the timing  of the completion of search and rescue operations, which are going  quite intensively. <The main goal is to search for the living people  left under the rubble. There is hope, even if it is small, even  though it will be a miracle. However, this hope is dwindling every  day. Our task today is to free the territory from debris, after which  we will turn to the buildings themselves>, the Deputy Minister noted,  adding that no other work is being carried out in the buildings,  except for cooling. He noted that a plan for further actions  regarding rear structures is already needed, and representatives of  other departments should be involved in the development of this plan.

On August 14 at 13:23 a powerful explosion was heard on the territory  of the Surmalu shopping center, which led to a strong fire. As of the  morning of August 16, 16 people were killed, 8 citizens are missing,  more than 61 people were hospitalized. In connection with the  incident, a criminal case was initiated.