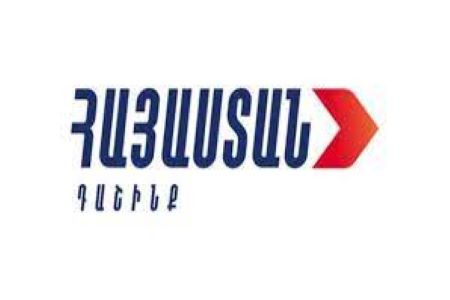 ArmInfo. The Armenia opposition bloc has issued a statement on the latest developments round Artsakh.

The residents of new Armenian settlements are facing evacuation as a  result of Azerbaijan's military aggression and the Armenian  authorities' defeatist policy.

"In fact, a specific date has been fixed, August 25, an the  authorities responsible for that have not even stated their position.  Azerbaijan is once again violating the trilateral statement by  threatening the closing of the corridor and demanding the surrender  of the adjacent settlements before the dates fixed by the document of  November 9, 2022.

"None of the points of the statement stipulates surrender of  settlements for road construction nor does the statement contain a  point under which the new the new highway is to bypass Berdzor,  Aghavno and Sus.

"This situation is, in fact, a manifestation of genocidal behavior in  the light of international norms.  Therefore, we are witnessing  further gross violations of international law and obviously illegal  demands.  And the Armenian and Artsakh authorities' readiness to meet  those demands at least serves as a basis for claims that we are once  again dealing with agreements behind the people - 'verbal mutual  understanding.' The announced deadline, August 25, is one more  proof," the statement reads.

The Armenian authorities' inconsistent and vague policy results in  lack of cooperation in any field - with the peacekeeping forces, OSCE  Minsk Group Co-Chairs or international agencies.

"Armenian and Artsakh are suffering daily defeat because of the  authorities symbolizing defeat, facing a threat of new irreparable  losses. The Armenian people must unite despite all the dividing lines  the authorities are drawing. The incumbent authorities, which are  serving the Turkish-Azerbaijani interests, are actually implementing  a programme of Armenians' evacuation from Artsakh," the statement  reads.

Azerbaijan has presented an ultimatum demanding resettlement of the   Berdzor, Sus and Aghavno residents until August 25, planning to close   the highway running along the Lachin corridor, while an alternative  highway has not yet been constructed. So Artsakh is facing complete   isolation. Azerbaijan's ultimatum is in conflict with Point 6 of the   trilateral statement Azerbaijan itself is referring to. The   international community is silent about that.  Earlier, Artsakh   Minister of Territorial Administration Hayk Khanumyan discussed   evacuation of the Aghavno, Sus and Berdzor residents with the   Kashatagh residents and local authorities. However, the local   residents will not leave.

Under the circumstances, 56 residents of Aghavno applied to the OSCE   Minsk Group co-chairs for immediate and active interference and   mediation by France and the United States for the village to be  relocated in the new corridor zone (just 1,200 meters of the area) to   avert a humanitarian disaster, which could deprive them of their way   of life, homeland and even lives.