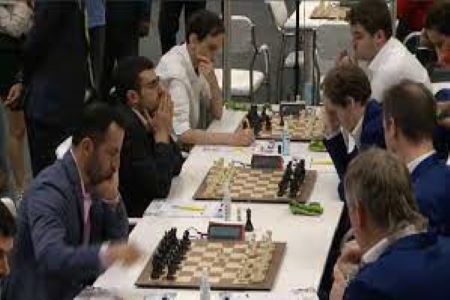 ArmInfo.Armenia gets the silver medal, while India B, formed by young talents, outpaced its seniors and snatched the bronze the press service of the  International Chess Federation (FIDE) reports.

According to the source, "history was made in the open section of the  FIDE Chess Olympiad, which came to an end this morning in Chennai,  India.

Uzbekistan, one of the youngest teams on the roster, defeated rating  favourites the Netherlands by 2.5-1.5, securing the gold medal.

Once again, Armenia outperformed the rating expectations and, despite  being the 12th seeded, got away with the silver medal. This is a  reassuring result for a team that last year lost its franchise  player, Levon Aronian, who changed federations to the USA.

As the former world championship challenger Nigel Short put it, "the  one immutable rule of Olympiads is that the team from Armenia is  always greater than the sum of its parts".

The Armenian squad was headed by Gabriel Sargissian on the first  board, who, despite a poor start with four draws and one defeat,  became the best scorer in the team during the second half of the  competition: his 4 victories and 1 draw during the matches against  direct rivals were one of the keys for the Armenian success. Robert  Hovhannisyan playing on board 4, also greatly contributed to team  Armenia's success," the source notes.

It should be noted that the Armenian men's team at the Olympiad was  represented by grandmasters Gabriel Sargsyan, Hrant Melkumyan, Robert  Hovhannisyan, Samvel Ter-Sahakyan, Manuel Petrosyan. The tournament  was held in Indian Chennai from July 29 to August 10. Armenia  won  Chess Olympiads three times - in 2006, 2008 and 2012.