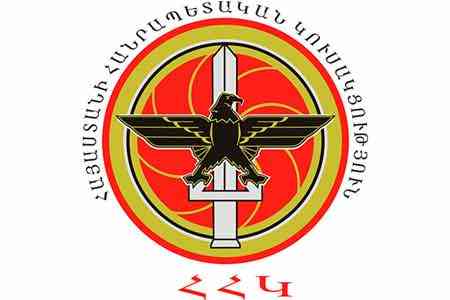 ArmInfo. The latest developments around Armenia and Artsakh are evidence that the  so-called "era of peace" is another empty vessel presented to the  Armenian people by means of manipulations, reads a statement by the  Republican Party of Armenia (RPA).

"Reprehensible is the fact that all the efforts by the Russian  Federation, European Union and other international entities have not  stabilized the situation in Artsakh or in Armenia, or prevented  hostilities or neutralized threats to civilians because of the  leaders' incompetence. Even more horrible is the fact the Armenian  people is not informed of the behind-the-scenes agreements the  premier and his regime have reached," the statement reads.

The international actors praising "democratic reforms" in Armenia are  unwilling to curb the Azerbaijani aggression, while Armenia's  complicated relations with its strategic ally since the seizure of  power in 2018 have compounded the situation.

"The problem, which is one more pretext for Azerbaijan's atrocities,  namely, the Berdzor corridor, is one of the proofs of the Armenian  authorities' incompetent and treacherous policy," the RPA states. In  the November 9 statement the parties committed themselves only to  design a new highway that would run along the Berdzor corridor rather  than map out a route beyond the geographical boundaries of the  corridor.

"The question is: with whose approval, with the Armenian authorities'  tacit consent, has a section of the route been constructed for  several months? The defeatist authorities, which are begging for  peace at any cost and turning a blind eye to the ongoing processes,  have all of a sudden decided to raise their voice, but no one is  interested in this belated response. The current situation is the  result of a trilateral agreement of November 9, 2020. This is also  the results of the efforts to reproduce the treacherous authorities,  which culminated in the elections of June 20, 2021," the RPA's  statement reads.

Striking evidence defeatist policy is the culpable failure to restore  the Armenian army's efficiency and renouncing the status of guarantor  of Artsakh's security, Artsakh's disarmament simultaneously with  Azerbaijan's militant rhetoric.

"The treacherous thinking 'let us surrender Artsakh and live a good  life' resulted in more losses. The RPA is extending its condolences  to the families of the killed servicemen and wishing recovery to  those wounded in the latest hostilities. The only way out of the  current situation is immediate resignation of the incumbent  authorities, which will nullify all the promises given behind the  Armenian people, enable the resumption of negotiations and  confirmation of Armenia's foreign policy agenda in the eyes of its  strategic ally and partners," thee statement reads.