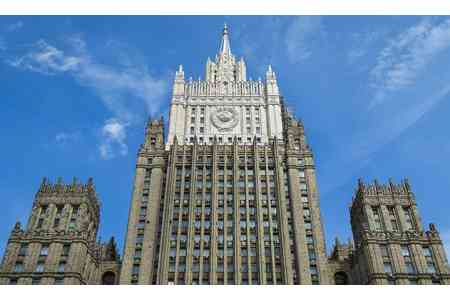 ArmInfo.We express our extreme concern over the escalation of tension in the area of the Lachin corridor and in other sections of the line of contact.

This is stated in the statement of the Russian Foreign Ministry in  connection with the latest developments in the zone of the  Nagorno-Karabakh conflict.

The ministry noted that Russian Foreign Minister Sergei Lavrov is in  close contact with his Azerbaijani and Armenian counterparts. "We  call on the parties to exercise restraint and observe the ceasefire  regime. We proceed from the premise that the settlement of existing  contradictions should be carried out exclusively by political and  diplomatic means, taking into account the positions of the parties  and in strict accordance with the provisions of the Statement of the  leaders of Russia, Azerbaijan and Armenia of November 9, 2020. We are  convinced that the efforts of the parties should be concentrated on  the formation of a positive agenda in relations between Baku and  Yerevan within the framework of the existing trilateral negotiation  formats>, in the Russian Foreign Ministry summed up.

Another aggravation in the zone of the Nagorno-Karabakh conflict  began on the morning of August 1.  Azerbaijani units do not stop  provocations and ceasefire violations. On August 1, as a result of  shelling from the Azerbaijani side, a soldier of the Artsakh Defense  Army was wounded.  As a result of the enemy's actions, 19 servicemen  of the Artsakh Armed Forces were injured and two more were killed.   The enemy used drones and grenade launchers. The goal is to force the  people of Artsakh to leave Berdzor.