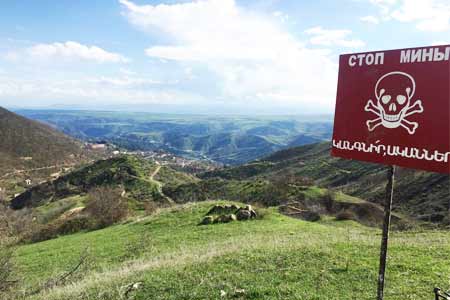 ArmInfo.The escalation by Azerbaijan is aimed at undermining the implementation of the November 9 statement, Armenia's Premier Nikol Pashinyan stated at a Cabinet meeting on Thursday.

Azerbaijan is constantly speaking of the Nagorno-Karabakh Defense  Army and of its deployment along the Line of Contact.

"If the Russian peacekeeping forces and Azerbaijan guarantee the  integrity of the Line of Contact, the Nagorno-Karabakh Defense Army  will not have to carry out combat missions, I think. It became  necessary only after Azerbaijan's refusal to sign the peacekeepers'  mandate and its regular violations of the November 9, 2020 statement,  including the point on all the hostilities, which is the essence of  the document," the premier said.

As regards the present escalation, he pointed out that Azerbaijan  used the issue of a new route of the Lachin corridor as a pretext for  it - "it has allegedly completed the construction and, therefore, a  number of section of the currently operating corridor must be brought  under it control."

Such statements by Azerbaijan are also a gross violation of the  November 9, 2020, statement, Armenia's premier said.

Specifically, according to Point 6 of the statement, "the Parties  have agreed that a plan for the construction of a new route along the  Lachin corridor shall be determined within the next three years,  providing communication between Nagorno-Karabakh and Armenia, with  the subsequent redeployment of Russian peacekeeping troops to protect  this route. The Republic of Azerbaijan shall guarantee traffic safety  for citizens, vehicles and goods in both directions along the Lachin  corridor."

"As of now, no plan agreed on by all the three parties is available.  Armenia has several times offered and is offering to do it now -  approving a trilateral plan," Mr Pashinyan said. He stressed that the  statement stipulates a "plan" and "redeployment of Russian  peacekeeping troops." Under the plan, a number of all- important  issues need to be specified, including electric power and gas supply  to Nagorno-Karabakh, as well as security issues.

Armenia has launched the Kornidzor-Tegh (M-12) highway renovation  project. And highway is expected to establish a connection with the  new Lachin corridor route, Mr Pashinyan said.

Azerbaijan is claiming Armenia is seeking to avoid discussing the  issues, which claim is absurd. Armenia's premier announced the  programme at his Jun 27 online new conference.

The latest escalation by Azerbaijan is aimed at undermining the  implementation of the November 9 2020 statement, Armenia's premier  said.