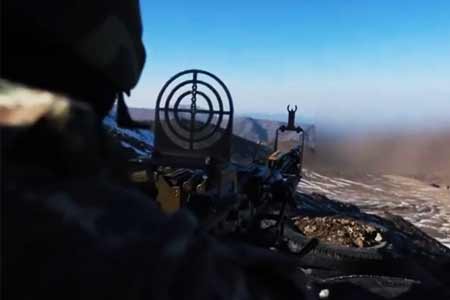 ArmInfo. Artsakh Defense Ministry has confirmed the fact that the situation in Lachin Corridor is tense.

Minutes later, Artsakh Defense Ministry reported that as a result of  the enemy's actions, one serviceman died and 8 servicemen were  wounded on the Armenian side.

"At about 3:00pm, Azerbaijani units used attack drones on the  northwestern section of the line of contact, as a result of which one  serviceman of the NKR Armed Forces died," the Defense Ministry of  Artsakh added. Earlier, ArmInfo, referring to its sources, reported  about the battles taking place in the Lachin Corridor.

Earlier, on August 3, the Azerbaijani Armed Forces announced that the  units of the Artsakh Defense Army allegedly opened fire on  Azerbaijani positions in the Lachin corridor, as a result of which  one Azerbaijani soldier was killed.

As ArmInfo previously reported with reference to the Artsakh Defense  Army, on August 1, starting at 9:00am, Azerbaijani units resorted to  provocations on a number of sections of the northern and northwestern  border of the Republic of Artsakh, attempting to cross the line of  contact, which were suppressed by the forces of the Defense Army  units Artsakh.

Mass media reports that fighting was also taking place on the border  with Armenia in the direction of Syunik and Gegharkunik. Meanwhile,  the Armenian Defense Ministry denied this information. Then ArmInfo  sources familiar with the situation reported that the enemy was  tasked to capture the height in the north-west of the NKR.

Russian peacekeepers immediately left for the scene of the incident.   Also, according to ArmInfo sources, Turkish-made Bayraktar drones  violated the airspace of Artsakh 4 times on March 1.

The situation continues to be tense to this day.

We also add that in this way, most likely, Azerbaijan is trying to  force Armenia to start building an alternative route to the Lachin  corridor.