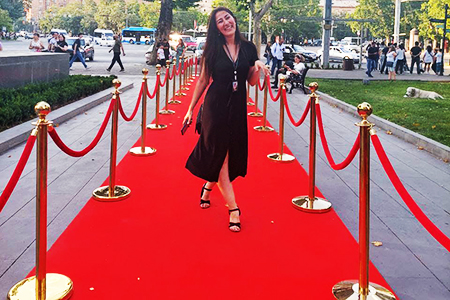 ArmInfo. Last time, the Golden Apricot International Film Festival took place in Yerevan, Armenia, in 2019. Over 2,000 guests visited thee festival, with over 100 films  screened for the Armenian audience. Some of the films were later  prize winners at prestigious international film festivals.

Karen Avetisyan, Artistic Director of the Golden Apricot festival,  says that over 150 renowned representatives of the movie industry are  coming to the festival this year. Among them are Irish screenwriter  and director Terence George, Michael Goorjian, an Emmy Award winning  actor, filmmaker, and writer of Armenian decent, Albert Serra, a  Catalan filmmaker, Philippe Bober, a leading European producer,  Marina Razbezhkina, a Russian screenwriter, producer, director and  documentary filmmaker.

"We have gone through a hard period and we hop that this year's  festival will mark the opening of a new chapter, especially on the  eve of thee 100th anniversary of Armenian cinema and 20th anniversary  of Golden Apricot," Mr Avetisyan told ArmInfo.

The festival opened with Amerikatsi (American) by Michael Goorjian.

"It is most important that the film was fully shot in Armenia by an  international team" he said.

Terence George, Head of the Jury, told reporters it is his third  visit to Armenia, where he feels quite at home.

As to the film assessment criteria, he said that independence is one  of the main criteria. The festival will close with Invisible Republic  by Garin Hovannisian.