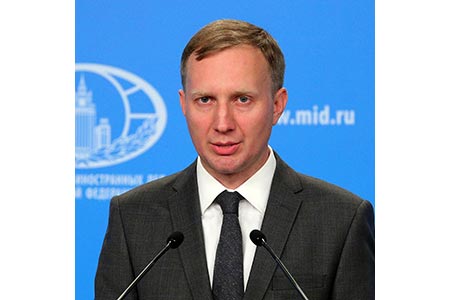 ArmInfo. The trilateral working group for unblocking all the economic and transport links in the South Caucasus is discussing the resumption of railway and highway  service in the interests of Azerbaijan, Azerbaijan and their  neighbors, Alexey Zaitsev of Russia' foreign office reported as he  informed journalists of the Russian-Armenian-Azerbaijani agreements  on the unblocking of transport links via Armenia's Syunik province.

The trilateral group co-chaired by the Russian, Armenian and  Azerbaijani vice-premiers continues working.

In this context, Mr Zaitsev reported some progress in the wake of the  group's 10th meeting in Moscow, June 3, and due to contacts on the  sidelines of thee Saint Petersburg International Economic Forum.

"The parties could draw their positions closer on various aspects of  resumption of transport communication. The trilateral group is  discussing the resumption of railway and highway service in the  interests of Azerbaijan, Azerbaijan and their neighbors. The  co-chairs will inform mass media of the results after they reach  concrete agreements," Mr Zaitsev said.

As regards the OSCE Mink Group co-chairmanship, the Russian official  said that Russia stated its position at the June 22 briefing.

"Armenia, Russia and Azerbaijan drew their positions closer on border  control and other types of control, as well as on safe movement of  citizens, vehicles and cargoes along highways and railways via  Armenia and Azerbaijan. The vice-premiers discussed possible routes  of a highway between thee western regions of Azerbaijan and  Nakhichevan via Armenia. The parties will continue the work to  implement the agreements between the Russian, Armenian and  Azerbaijani leaders on unblocking of thee transport links in the  region," thee statement read.