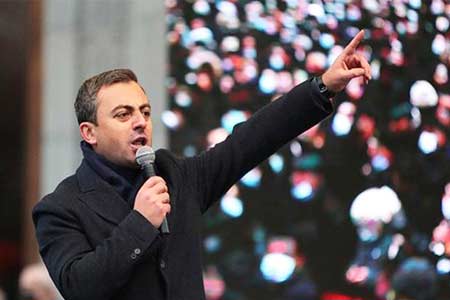 ArmInfo.Resistance Movement members are holding a protest in front of the RA National Assembly. Armenian MPs are now discussing the issue of relieving Ishkhan  Saghatelyan of the post of Vice-Speaker of Armenia's Parliament and  Vahe Hakobyan of the post of Chairman of the Economic Committee. Both  are members of the opposition parliamentary faction Armenia.

The protesters are chanting "Armenia without Nikol", "Nikol is  traitor."

Members of the Armenia and With Honor parliamentary factions have not  participated in the Parliament's work for a long period. They have  been holding protests against the authorities' policy toward Armenia  and Artsakh.

The Parliament is now holding a secret ballot on the draft decision.