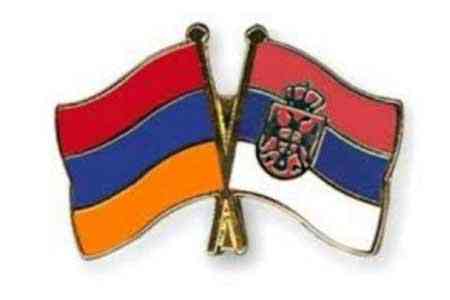 According to the press service of the  RA Foreign Ministry, noting  the high level of political dialogue between Armenia and Serbia, the  interlocutors discussed the possibilities of deepening and  strengthening friendly relations and taking practical steps in this  direction.

During the consultation, a number of issues on the regional and  international agenda were touched upon.  Armenia's steps aimed at  establishing peace and stability in the South Caucasus were  mentioned.

The Armenian side, in the context of resolving humanitarian issues  caused by the 44-day war unleashed by Azerbaijan, stressed the need  for the repatriation of Armenian prisoners of war, hostages and other  detainees, as well as the preservation of the Armenian cultural and  religious heritage in the territories that came under Azerbaijani  control.

At the end of the consultations, the Serbian delegation was received  by RA Foreign Minister Ararat Mirzoyan, who noted the importance of  mutual visits and contacts at various levels aimed at constantly  expanding the political dialogue between the two countries and  identifying new areas of mutually beneficial multi-sectoral  cooperation.