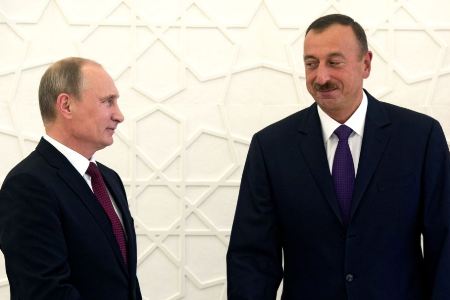 ArmInfo. Russian President Vladimir Putin met with the President of Azerbaijan Ilham Aliyev during his visit to Turkmenistan, TASS reports.

The meeting took place on the sidelines of the sixth Caspian summit,  which took place in Ashgabat Wednesday.

The leaders of Russia and Azerbaijan have regular contacts both in  bilateral and multilateral formats. Last time, the two heads of state  communicated in late May: they had a phone call and discussed, in  particular, the situation around Nagorno-Karabakh, as well as issues  of cooperation between Moscow and Baku.

The two presidents last met in person in on February 22 in the  Kremlin. Back then, Putin and Aliyev also discussed bilateral topics,  Nagorno-Karabakh and the situation in Ukraine. After the  negotiations, they signed a declaration on allied cooperation and  answered reporters' questions.