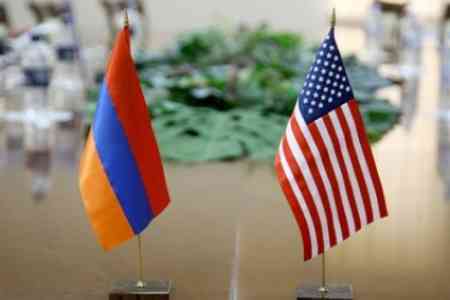 ArmInfo.Deputy Prime Minister of Armenia Mher Grigoryan and USAID Mission Director for Armenia John Allelo signed a 5-year Development Objectives Grant Agreement between the Republic of Armenia and the United States of America, under which  a $120 million grant assistance will be provided to Armenia.

According to the Press Service of the Government of the Republic of  Armenia, the agreement is aimed at strengthening democratic values  and ensuring economic stability.

Representatives of both USAID and Armenian state institutions were  present at the signing ceremony.  "On behalf of the Government and on  my personal behalf I would like to thank you for the assistance  provided to Armenia, emphasizing that the directions set by the  agreement are of great importance for overcoming the economic  challenges Armenia faces in this difficult period, as well as for  sustainable development and strengthening democracy in the country,"  Deputy Prime Minister Mher Grigoryan said.  "I would like to  especially thank all our government counterparts who have been  instrumental in reviewing this agreement. Your time, feedback, and  investment in crafting this document, and making this day a reality,  highlights our commitment to shared values and initiatives. The  United States remains committed to supporting Armenia on its  democratic and economic reforms" Mission Director John Allelo said.

The agreement aims at promoting transparency and accountability in  the public administration, strengthening local governance capacity,  as well as participatory and inclusive electoral and political  processes and the rule of law.

The programs to be implemented under the agreement will promote  inclusive participation of citizens in governance, facilitate access  to independent and diversified sources of information. In order to  strengthen economic stability, the programs will aim at increasing  the competitiveness of the private sector, strengthening the  workforce, and sustainable management of natural resources.

It should be reminded that at the meeting on June 23, the Government  of Armenia approved the proposals on concluding an agreement on  development-oriented cooperation between the Republic of Armenia and  the United States of America.

The US Agency for International Development (USAID) plans to  distribute its contribution as follows: 68 million 565 thousand  dollars will be directed to promote democracy, and 51 million 435  thousand dollars - to improve economic security.