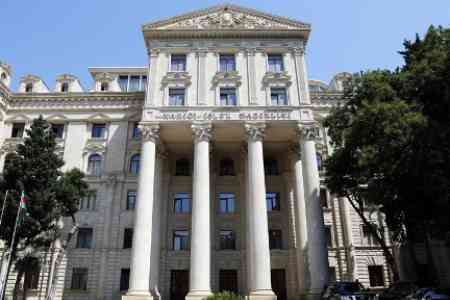 ArmInfo.Official Baku issued an unclear statement in response to accusations by Armenian Prime Minister Nikol Pashinyan made during an online press conference on  June 27.

In particular, Pashinyan stated during an online press conference  that Azerbaijan responds to all the peace initiatives of Armenia with  aggressive rhetoric.  In this regard, the Prime Minister noted that  the tripartite statement establishes the legal obligation of  Azerbaijan and Armenia to achieve the opening of communications. He  accused Azerbaijan of unwillingness to open communications. Pashinyan  cited two cases when a preliminary agreement was reached on holding a  meeting of the commission on the delimitation and demarcation of the   Armenian-Azerbaijani border, and in both cases Baku either refused   or demanded to postpone it. The same applies to transport   communications.  < Azerbaijan tries to make an impression that   Armenia opposes the unblocking of transport communications, which   violates the provisions of the tripartite statement," Pashinyan  said, adding that with its attempts Baku is trying to make an  impression that Armenia does not want to fulfill its obligations  under the tripartite statement, and thereby legitimize a new war  against Armenia and Karabakh.

The RA Prime Minister also noted the importance of continuing the  activities of the OSCE Minsk Group and expressed bewilderment at the  statements of the Russian Foreign Minister on this issue, made in  Baku.

In this regard, the Azerbaijani Foreign Ministry decided, already by  tradition, to shift all the blame to Armenia and assured that these  statements by Pashinyan cast doubt on the desire of this country to  establish peace in the region.

"Azerbaijan presented Armenia with the basic principles for  concluding a peace treaty. If Azerbaijan wanted war, it would not do  so. Azerbaijan also calls for delimitation of borders between the two  countries and opening all communications in the region," the Ministry  of Foreign Affairs of the Republic of Azerbaijan noted, adding that  the obligations, taken by the parties on tripartite statements and  their implementation are obvious.

"As for Pashinyan's statements about the disruption of the June 27  meeting by Azerbaijan, the Armenian side, under various pretexts, has  repeatedly disrupted meetings with the participation of international  mediators.  If Armenia really wants peace, then it must show  political will and take steps towards peace, and not try to revive  the format, the effectiveness of which has always been low, and its  participants openly admit the impossibility of its functioning," the  Azerbaijani Foreign Ministry said in a comment.