View from Moscow: If Russia does not deal with the problems between  Armenia and Azerbaijan, the West will deal with them 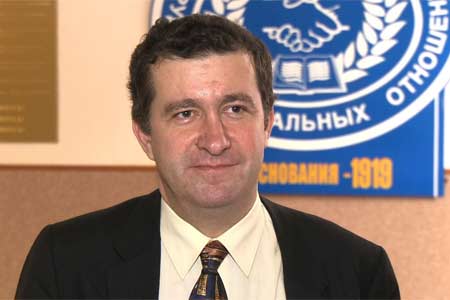 ArmInfo. If Russia does not deal with the problems between Armenia and Azerbaijan, the normalization of relations between Baku and Yerevan, the West will inevitably deal  with this. Deputy Director of the Institute of Oriental Studies of  the Russian Academy of Sciences Alexander Skakov expressed a similar  opinion to ArmInfo.

"I believe that, taking into account the current relations of Moscow  with Washington or Brussels, Moscow is, let's say, not too interested  in this. This is where the need to intensify our diplomacy in the  normalization of Armenian-Azerbaijani relations comes from. For  example, in the context of the visit of its head Sergey Lavrov to  Baku, who discussed the process of unblocking transport  communications there," he said.  According to Skakov, against the  background of the current acute phase of geopolitical competition  with the US and the EU, not only in the South Caucasus, but also in  all other regions, given the new challenges and the growth of Western  influence in the Karabakh conflict zone, stimulating the dialogue  between Yerevan and Baku is a priority for Moscow, of course, both in  a bilateral format and with its own participation.

At the same time, Skakov conditioned the growth of mutual demands of  the parties to the conflict by the presence of a mediator in the  person of the EU, with whom, quite possibly, it would be more  profitable for them to deal with today.  This regard, everyone will  try to benefit from the current situation. This will require Moscow  to make additional efforts to balance the expectations and appetites  of the parties, including in order to maintain the existing influence  on them.

"We see that it is precisely additional efforts in solving emerging  problems that are expected in Yerevan and Baku from Moscow. Baku, in  particular, is rushing Moscow to reach a peace agreement and  communication to Nakhichevan. This is accompanied by an increase in  the degree of Azerbaijani rhetoric.  Hence, the high degree of  Moscow's position, both diplomatically and militarily  arises in  Nagorno- Karabakh," summed up the orientalist.