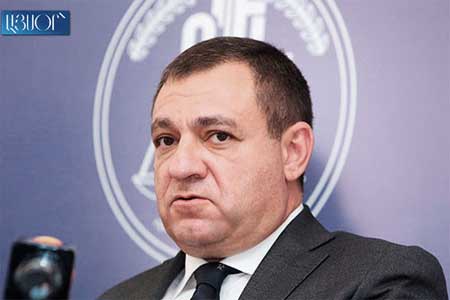 Acting Chairman of the SJC Gagik Jhangiryan, reading out the  decision, noted that it was final and was adopted on June 16.

Members of the SJC Grigor Bekmezyan, David Khachaturyan and Liparit  Melikjanyan filed an application to initiate disciplinary proceedings  against Vardazaryan. Vardazaryan's interview with one of the Armenian  media is the basis for initiating disciplinary proceedings. In this  interview, Vardazaryan touched upon the issue of the  constitutionality of the decision related to the application for the  election of Gagik Jhangiryan as a member of the SJC due to the age  requirement, noting that this violates the principle of judicial  neutrality.

It is noteworthy that earlier MP from the "Armenia" opposition  faction, lawyer Aram Vardevanyan, referring to the scandalous  recording of the conversation between Jhangiryan and the dismissed  head of the Supreme Judicial Council Ruben Vardazaryan, published on  June 20, noted that the Acting Head of the Supreme Judicial Council  Gagik Jhangiryan cannot participate in the consideration of  disciplinary proceedings in relation to Ruben Vardazaryan, including  in terms of the decision.

"Firstly, a criminal case should be initiated against Gagik  Jhangiryan. Secondly, Gagik Jhangiryan cannot participate in the  consideration of disciplinary proceedings against Ruben Vardazaryan,  including in terms of making a decision. Considering the first  circumstance, Jhangiryan's powers must inevitably be suspended, it  will apply to all proceedings," Vardevanyan said.  It should be noted  that on June 20, temporarily dismissed Chairman of the Supreme  Judicial Council Ruben Vardazaryan published a scandalous recording  of a conversation with Acting Chairman of the Supreme Judicial  Council Gagik Jhangiryan and a member of the Supreme Judicial Council  Stepan Mikayelyan, which took place on February 20, 2021. In this  conversation, Jhangiryan persuades Vardazaryan to leave his post,  while asking him to do it "for good, quietly and peacefully." He  advises to think about the future of children, family and assures  that if he leaves, then all criminal cases initiated against him will  be terminated. "I guarantee you this as long as I'm alive,"  Jhangiryan said, according to the recording.

Following the release of the recording, the Prosecutor General's  Office announced that it had sent the recording of a conversation  between Gagik Jhangiryan,  member of the SJC, Stepan Mikayelyan, and  Ruben Vardazaryan, to the Investigative Committee.  To recall, Gagik  Jhangiryan was appointed Acting Chairman of the SJC at a closed  meeting on April 15, 2021.