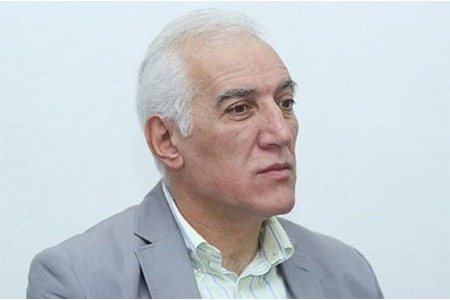 ArmInfo.Armenian President Vahagn Khachaturyan gave a interview to response to the Public Television of Armenia.

"We should be realists," he said in response to a question about the  opposition's argument that Artsakh can never be part of Azerbaijan.

"If you state this, you lose room for maneuver. We should be capable  of differentiating between policy, diplomacy and populism and public  statements. But we are not doing so. We should not disable the people  responsible for the country and participating in the negotiations.  The premier was courageous enough to say it straightforward. What is  bad about it? Not everything should be made public. At present I am  not reporting the details of my private meetings as I had no  agreement with that person and I have no right to speak about that.  But I realize the risks of saying something aloud. The difference is  great," the president said.

And opposition members are perfectly aware of that. Some of them  found themselves in similar situations, and in this respect their  behavior is giving rise to questions.

"If we take the Artsakh problem to heart - and I am sure we all do so  - this concern must be reflected in each of us doing what they  should. The opposition has its own business, the authorities are well  aware of their role and our society has its work to do," the  president said.

As to the possibility of establishing a dialogue with the opposition,  Mr Khachaturyan stated his readiness.

"But provided that it is a civilized dialogue, in a civilized  language. I am not going to educate anyone. We are too old for that,"  Mr Khachaturyan said. The opposition has been refusing to start a  dialogue since the very beginning, he added.