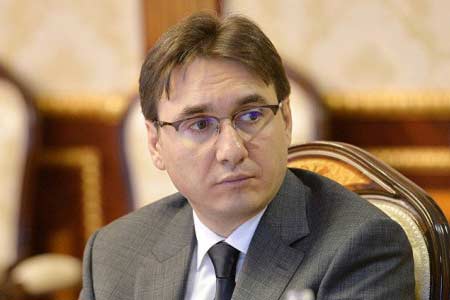 ArmInfo. Vladimir Vardanyan, a member of the Civil Contract parliamentary faction, called on PACE not to be deaf and blind when it comes to the organization's values.

According to him, for many years after the World War II Europe had  believed that the new generation would be protected from any armed  conflicts or global disasters. However, the entire world is concerned  over war returning to Europe. Peace has been nothing but a delusion,  especially after PACE turned a blind eye and a deaf ear to the armed  conflicts in Cyprus, in the Balkans, Moldova, Georgia, Tajikistan,  Kosovo, Nagonro-Karabakh, Lybia, Syria, Iraq.

The question is a difficult one, but the answer is a clear one: the  wars and armed conflicts did not appear so conspicuous as most people  believed the conflicts "were far away." But the present international  situation makes people realize that no state is protected from war -  even the wealthiest and most protected one.

It means being most sensitive to the slightest deviations from  democracy, fundamental human rights and rule of law, as such  deviations undermine peace and provide a breeding ground for war, Mr  Vardanyan said. According to him, indifferent faces of some PACE  members are evidence they are sick and tired of debate over  Nagorno-Karabakh. Saying that he was not raising the Nagorno-Karabakh  problem again, Mr Vardanyan warned the PACE members against being  indifferent. Otherwise, global disasters are inevitable.