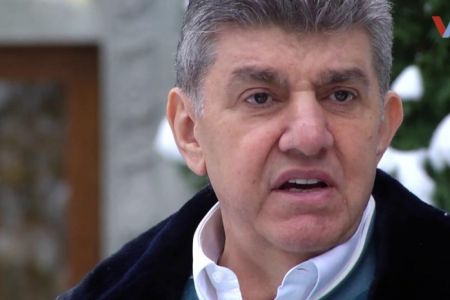 ArmInfo.Ara Abrahamyan, President of the Union of Armenians of Russia, has addressed letter to the RF Presidential Administration and to the Director General of  the Russian Television and Radio Broadcasting Company after a June 19  report by the Russia-1 TV channel, which, among other things, deals  with Nagorno-Karabakh.

According to Mr Abrahamyan, the author of the report Alexander  Buzaladze is making value judgements.

"According to the author, the criterion of Nagorno-Karabakh's  prosperity is the Fizuli international airport, new roads, a  renovated office building in Shushi, a barber's shop, supermarket,  and so on. But the author is completely silent about the cultural  genocide the Azerbaijani authorities have committed against the  Armenian religious and cultural monuments in Shushi after Azerbaijan  established control over the town in the wake of the last Karabakh  war. It involves destruction of both ancient and modern Armenian  churches, particular the magnificent Church of Christ the Savior,  which fact Ara Abrahamyan has repeatedly reported to UNESCO, as well  as the monuments to such renowned natives of Shushi as Nelson  Stepanyan (two times Hero of the Soviet Union)," the letter reads.

The biased coverage of the topic of Nagorno-Karabakh is not only in  conflict with the Armenian-Russian relations, but it will by no means  contribute to normalization of the Armenian-Azerbaijani relations,  building of confidence between the Armenian and Azerbaijani  communities in Russia, the letter reads.

Official Yerevan has not so far responded to the report.