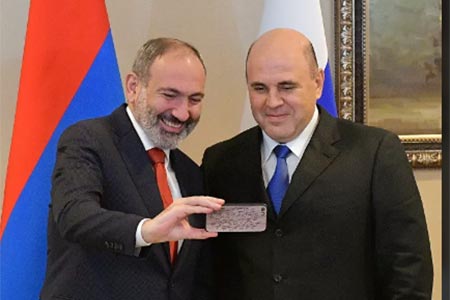 ArmInfo. Russia is giving priority to unblocking economic and transport ties in the  Transcaucasus. Russian Prime Minister Mikhail Mishustin stated this  during a meeting with Armenian Prime Minister Nikol Pashinyan within  the framework of the bilateral meeting in Minsk on June 20.

The Russian prime minister noted that practical work is being  actively carried out within the framework of a trilateral working  group chaired by the vice-premiers of Russia, Armenia and Azerbaijan,  whose regular meeting was held yesterday during the St. Petersburg  International Economic Forum.  For his part, Pashinyan thanked the  Russian side for resolving the problems that arose at the Upper Lars  checkpoint, recalling that this is "the only land road that connects  Armenia and Russia."

<We were quite concerned about this, as there were concerns related  to that issue, as there are certain problems related to the increase  of economic flows. It is very important what we agreed on, including  with our Georgian partners, so that the trade turnover between  Armenia and Russia does not face artificial barriers, the Prime  Minister of Armenia said. At the same time, he supported the process  of unblocking communications in the region. Pashinyan expressed hope  that as a result of the work done, it will be possible to come to  concrete solutions.

Mishustin also drew attention to the fact that Russia has lifted all  restrictions on the entry of Armenian citizens through the land  border, which, according to him, will contribute to the development  of tourism and economic ties between the two countries. <In  accordance with the decision of the government, all restrictions on  the entry of Armenian citizens into the territory of Russia by land  have been lifted. We expect that tourist flows will recover in the  near future, and this is very important for the residents of Armenia  and Russia," the head of the Russian government said.

It should be noted that the Prime Minister of Armenia arrived in  Belarus to participate in the regular meeting of the Eurasian  Intergovernmental Council.