David Babayan: Incident in Parukh is a terrorist act against Russian  peacekeepers and Artsakh 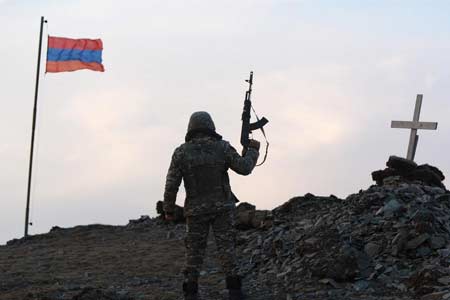 ArmInfo. The fate of Artsakh is under threat. Head of the NKR Foreign Ministry David Babayan stated on June 20 at the presentation of the book "The Karabakh conflict and  the foreign policy of the Republic of Artsakh", referring to the  invasion of the Azerbaijani Armed Forces into the zone of  responsibility of Russian peacekeepers in Parukh.

" Do you love Artsakh? What is Artsakh for you? If you love it, you  must understand what needs to be done that we don't do any harm. If  we lose Artsakh, there will be no Armenia. Forget it," he said,  adding that today people walk carelessly around Yerevan, as if  nothing is happening, however, everything can change in a moment, and  on September 26, 2020, people in Stepanakert were also carelessly  going about their daily business.

"You are now saying that the Russian peacekeepers have not fulfilled  their obligations, but do we have the right to reproach, especially  the country on which our security and future depend? This does not  mean at all that nothing depends on us, "But I repeat, Armenians and  Jews can afford to use the Diaspora for the benefit of their country  while maintaining good relations with all countries," said the NKR  Foreign Minister.

At the same time, he stated that the Armenians have an enemy in the  person of Azerbaijan, where armenophobia is being planted at the  state level. According to him, the Russian peacekeepers also knew  that. "The incident in Parukh is not only a blow to Artsakh, but also  to Russian peacekeepers. And instead of understanding this, we are  also trying to blame. And who benefits from this? Enemy! How can an  Armenian do it in such a way as to hit the same nail like the enemy,"  Babayan was indignant.  At the same time, he stressed that if the  Armenians have good relations with friendly, fraternal Russia, this  does not mean at all that it is necessary to have enmity with other  countries. In this vein, the diplomat once again stressed that the  two Armenian states are obliged to have good relations with all  states where there is a Diaspora.  "The incident in Parukh is a  terrorist act, an attack on Russian peacekeepers and Artsakh. And  this will not go unanswered, and it does not matter when. In general,  terrorism will not go unanswered," the NKR Foreign Minister said.

Concerning the future fate of the Russian peacekeeping mission,  Babayan expressed his conviction that they would continue their  activities. "And here the question is not Azerbaijan's desire. If the  issue is not resolved, what will they do? Do peacekeepers pose a  threat to Azerbaijan? Russia bears historical and moral  responsibility for the fate of the region. I think that the mission  will be extended," Babayan concluded.

It should be noted that on March 24 the Azerbaijani Armed Forces,  having violated the line of contact, invaded the village of Parukh in  the Askeran region of Artsakh and tried to capture the strategic  height of Karaglukh. These territories are in the zone of  responsibility of Russian peacekeepers. The co-chairing countries of  the OSCE Minsk Group called on Azerbaijan to restore the contact line  of March 23.  However, the Azerbaijani Armed Forces continue to be at  the Karaglukh height, as a result of which more than 400 people  cannot return to their homes.  On June 9, Russian Foreign Minister  Sergei Lavrov, commenting on the situation around the Karabakh  village of Parukh, where the Azerbaijani Armed Forces invaded on  March 24, noted that the Russian military keep this issue as one of  its priorities, which Armenian partners are well aware of.

"There are already certain results in terms of de-escalation of the  situation on the ground. And we have an understanding that within the  framework of substantive work on delimitation that is already  beginning, these issues will be considered and will certainly be  resolved," the Russian minister said.