Foreign Minister of Artsakh on joining Azerbaijan: People in the  Auschwitz camp also had "rights and freedoms" 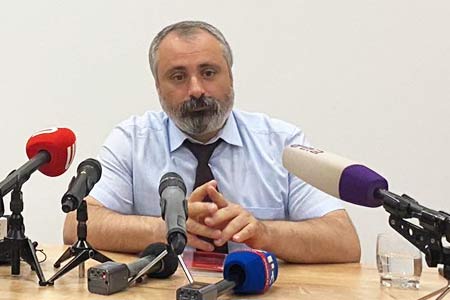 ArmInfo.Artsakh can never be part of Azerbaijan, and the official Stepanakert has repeatedly spoken about this. This was announced on June 20 at the presentation  of the book "The Karabakh conflict and the foreign policy of the  Republic of Artsakh" by NKR Foreign Minister David Babayan.

According to him, both the Armenian people and official Yerevan are  also well aware of this. "We will stand to the last and never allow  our red lines to be crossed," he said.

Touching upon the issue of the future status of Artsakh, Babayan  pointed to its complexity. "The Karabakh conflict is one of the most  difficult in the world, it can probably be equated to the  Palestinian-Israeli one in terms of difficulty. We cannot expect a  quick settlement. It will not be possible to reach a settlement in a  short time, so you need to be realistic and understand that the final  settlement is a task of the distant future," Babayan said, calling in  this vein to protect and defend Nagorno-Karabakh.

According to him, there are all possibilities for this.   "Consequently, if there is no comprehensive settlement, Artsakh will  continue to maintain its status as a de facto independent and  sovereign state, and then we'll see," the head of the foreign  ministry said.

To clarify whether this issue is being discussed now, Babayan  admitted that the issue of status is not being discussed now. The  head of the NKR Foreign Ministry noted that of course, they want a  speedy settlement of the conflict, but at the same time, the red line  for them is that they will have nothing to do with Azerbaijan in this  issue in any way or depend on it.

Speaking about the negotiation process, the head of the NKR Foreign  Ministry noted that one should remember that "we face a state in  which hatred towards Armenians is being planted."

At the same time, he expressed his conviction that the Armenians need  to learn a lot from the enemy, who has a very organized approach to  many issues. "You know, it is not so easy to take such bold steps. We  have lost about 80% of our state. Remember the massacre of 1915. And  what, did the Turks and Azerbaijanis repent of something? Do you  expect Azerbaijan to change overnight?  Especially when they see how  certain circles are scourging Russia," he said.

Referring to the statements of the Prime Minister of the Republic of  Armenia Nikol Pashinyan from the rostrum of the Parliament regarding  Artsakh, where the security of the population of Artsakh was  indicated as a key factor, and not its status, Babayan noted that he  has no idea what any leader of Armenia can think, and even more so  take steps to make Artsakh a part of Azerbaijan.

"I don't want to believe in this. As for rights and freedoms, we have  no future as part of Azerbaijan. I will give you a good example. The  poor fellows kept in the Auschwitz concentration camp , also had  "rights and freedoms" - they had the right to sleep - one hour, and  the right to walk, were free in their barracks - to roll over from  side to side in their beds. These are also "rights and freedoms". But  the future in Azerbaijan, is even worse than this," he said,  emphasizing that they will continue to preserve their de facto  independence.

At the same time, speaking about a comprehensive settlement, Babayan  stated that the peace treaty should be signed by Artsakh, Azerbaijan  and Armenia, and if something does not suit Baku in this format, then  everything will remain as it is now de facto, and de jure it's all a  matter of time.

"But, de facto, we do not see ourselves as part of Azerbaijan, what  should we negotiate with them about.  They closed this page for  themselves, and we closed it," the NKR Foreign Minister said, adding  that the Armenian authorities have not officially stated that Artsakh  should become part of Azerbaijan, and this is not acceptable.

According to him, even if the world says that Artsakh should do this,  they will not take this step, they cannot be forced to do so.

"Then it's better to die with dignity in the struggle than to become  a slave who is constantly raped," said the head of the Foreign  Ministry.

Regarding the lowering of the bar, Babayan noted that what kind of  bars are in question, only red lines remained. "We have only one red  line left - the status, what levels can we talk about. If we lower  the bar, then Azerbaijan is moving forward step by step. We do not  see ourselves as part of Azerbaijan. This is a fact," he said, adding  that Artsakh society is united in this issue.

At the same time, he urged not to blame anyone for what happened to  the Armenian people throughout its history. According to the head of  the NKR Foreign Ministry, "Armenians themselves are to blame for all  their troubles."