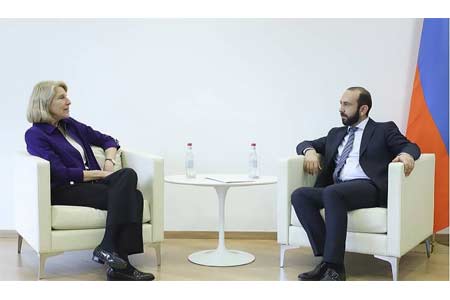 ArmInfo. At a meeting with US Assistant Secretary of State for European and Eurasian Affairs Karen Donfried, RA Foreign Minister Ararat Mirzoyan spoke about the  normalization of relations between Armenia and Azerbaijan, the  activities of the delimitation and border security commission, as  well as the current processes on the issue of unblocking economic  ties and transport communications in the region.

According to the RA MFA press service, Mirzoyan touched upon these  issues during the discussion of topics related to regional security  and stability.

Touching upon the settlement of the Nagorno-Karabakh conflict, the  Armenian Foreign Minister stressed the need for a complete resumption  of peace talks aimed at a comprehensive and long-term settlement of  the conflict within the framework of the OSCE Minsk Group Co-Chairs.  In this context, he pointed out the important role of the United  States as a co-chair of the OSCE Minsk Group.

The Minister of Foreign Affairs of the Republic of Armenia also spoke  about the humanitarian issues that arose as a result of Azerbaijan's  aggression against Artsakh in 2020. In particular, issues related to  the immediate release and repatriation of Armenian prisoners of war  and civilians held in Azerbaijan, and the preservation of the  Armenian cultural and religious heritage in the territories that came  under the control of Azerbaijan as a result of the war.

Mirzoyan also touched upon the process of normalization of relations  between Armenia and Turkey. The necessity of taking concrete steps  towards a settlement was stressed. The interlocutors touched upon the  Armenia-US bilateral relations based on the common values of  democracy, human rights protection and the rule of law, as well as  the prospects for expanding cooperation in areas of mutual interest.