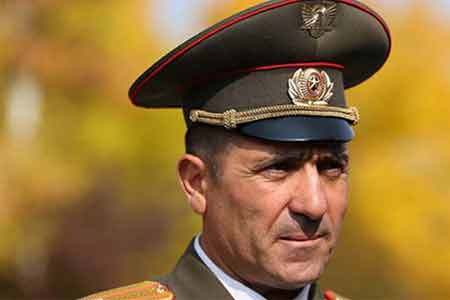 ArmInfo. Major-General Armen Harutyunyan, the former Head of the Missile and Artillery Troops/Head  of the RA Armed Forces department, was arrested.

According to the source, in the course of investigative measures, it  was established that the chairman of the Commission for the receipt  of goods supplied under the contract signed by the RA Ministry of  Defense and a company operating in the country, Armen Harutyunyan,  with the intention of stealing a particularly large amount of money  from the RA Ministry of Defense, provided assistance to the director  of the supplier company and the owner in the process of accepting  property that does not correspond to the subject of the contract.

The National Security Service of the Republic of Armenia noted that  Harutyunyan, instead of the shells for artillery specified in the  contract, by hiding the fact of a discrepancy between the tactical  and technical characteristics of the delivered property, purchased  Czech-made shells for a total amount of 523,089,000 drams ($  1,083,000), which, according to their tactical and technical  characteristics were significantly inferior to those shells that were  provided for by the contract.

In particular, the range of hitting the target was not ensured, the  errors of hitting the targets turned out to be much higher than the  norm, the shells did not correspond to the gravitational  characteristics of the artillery shells available on the balance  sheet of the Ministry of Defense and the parameters of the firing  schedules of the RA Armed Forces.  "Consequently, when using  artillery, it was impossible to conduct aimed fire from the  above-mentioned projectiles and perform combat missions. As a result,  on the basis of the signed contract, 1,083,000 US dollars were  transferred to the company's account, which entailed severe financial  consequences for the state," they noted.

The department noted that the specified batch of shells was used  during the 44-day war, and in view of the abovementioned  shortcomings, it did not allow to fulfill the assigned combat  missions. "In the framework of the abovementioned case, charges were  also brought against the director of the supplier company and the  owner," the NSS noted, adding that investigations in the framework of  the criminal case are ongoing and steps are being taken to establish  the full range of persons involved in the corruption scheme and bring  them to justice.