Garik Israelian: Coming to Armenia is an experiment for STARMUS 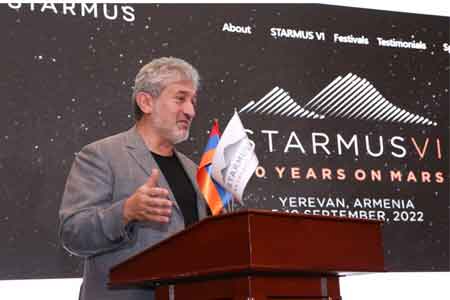 ArmInfo.Astrophysicist at the Institute of Astrophysics of the Canary Islands (Spain), creative director and spiritual father of the STARMUS festival Garik Israelian  hopes that holding the STARMUS VI science and art festival in Armenia  will be a good opportunity for Armenian youth to get out of the  post-war depression and the toxic environment that has been created  inside countries today.

Thus, on June 16, during a press conference in Yerevan, presenting  the agenda of the upcoming festival in Armenia on September 5-10,  Israelian noted that, in general, the festivals held by them were  active and aroused wide public interest.

"Coming to Armenia for STARMUS is an experiment. We were interested  to see how society and the media will react to this festival. The  quality of our festival and interest in it are increasing year by  year. We have already received a number of invitations to host the  festival, including from the USA," the astrophysicist said.  Speaking  about the upcoming festival, he noted that the agenda is quite  substantial, and the cost of tickets for events is symbolic. "Unlike  Europe, where the cost of tickets for the festival was 700 euros, it  was decided to set the minimum possible, symbolic price for the  Armenian festival - 25,000 drams for participants and 20,000 drams  for students, moreover, for participation in four days of lectures,"  the co- founder of the STARMUS festival said. adding that the scale  of the festival is unique in that it popularizes science, brings  science closer to young people, summing it up with art and music,  inspiring new research and discoveries.

He informed that the "Discover the space and change the world"  conference, which will be held on the territory of the Sports and  Concert Complex, will be attended by about 7,000 participants.  According to the scientist, all events will be held from 3:00pm local  time and leading scientists, including Nobel Prize winners, will give  20-minute lectures in various fields.

"Then there will be the ceremony of presenting the Stephen Hawking  Medal, which is recognized worldwide as the "Oscar" for the  popularization of science. In addition, there will be a panel  discussion, "108 minutes of a round table", with the participation of  Nobel laureates. We do not yet know who will participate in this  discussion.

In addition, Star Party is expected - a special event with the  participation of world-famous guests and local representatives, which  will be held in Garni. A large number of telescopes brought to  Armenia within the framework of the festival will be placed here, and  the participants of the event will have the opportunity to watch the  stars all night long," Israelian said.

According to him, the "Science Camp" project will also work for a  week, which will allow everyone to get acquainted with the  innovations of the scientific world.

"The area adjacent to the National Academic Opera and Ballet Theater  will be transformed into a large- scale scientific and technical  center, where the latest scientific achievements will be presented in  large thematic pavilions: astrophysics, laser physics, drones,  robotics, artificial intelligence, agricultural technology, nuclear  energy, etc. About 100 thousand visitors are expected from Yerevan as  well as from the regions of Armenia and Artsakh," he said.

According to him, there will also be a two-day "Space Technologies"  conference, which will be held within the framework of the festival  in the Sports and Concert Complex,and  will be attended by about 20  speakers from around the world, including the Satlantis space  technology company. He noted that there will be programs with the  participation of Armenian universities.

In general, according to the astrophysicist, 90% of the STARMUS  festival attracts the attention of non- academics. "60% of those who  are interested in our festivals are doctors and lawyers," Israelian  stated.

Speaking about the goals of the festival, he expressed the hope that  STARMUS will attract the attention of young people. "Today, Armenian  youth lives in a toxic environment. Almost the entire media space is  filled with toxic information that poisons life, only negative. And  we hope that our festival will become a kind of light in this space,  because the future of Armenia is in science, education and culture,"  said the eminent astrophysicist.

Israelian also informed that they plan to purchase a telescope for  Armenian schools with the proceeds received.

In Armenia, the "STARMUS VI: 50 Years on Mars" program provides for  other equally interesting events both in Yerevan and in the regions  of Armenia in cooperation with a number of Armenian institutions and  organizations: the Children of Armenia Foundation (COAF), the Tumo  Center for Creative Technologies, Enterprise Incubator Foundation  (EIF), Ayb Educational Foundation, Teach for Armenia, A. Alikhanyan  National Science Laboratory, Scientific Research Institute.