FIFA to support process of building national stadium in Armenia 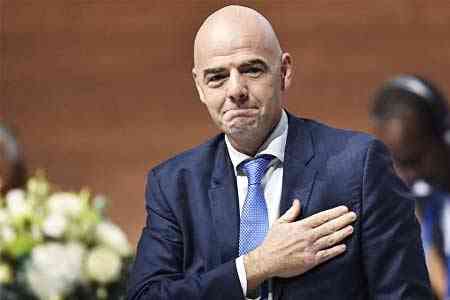 ArmInfo. RA Prime Minister Nikol Pashinyan received FIFA President Gianni Infantino, who visited our country within the framework of events dedicated to the 30th  anniversary of the Football Federation of Armenia (FFA).

According to the press service of the government, the Prime Minister  welcomed Mr. Infantino's visit to our country, his participation in  the events dedicated to the 30th anniversary of the FFA, which  testifies to the effective cooperation between FIFA and the FFA.  Nikol Pashinyan noted with satisfaction that in recent years about 90  small stadiums have been built in Armenia under the Government  programs and with the support of FIFA, "The development of football  infrastructure is important not only for sports but also for  educational, social and cultural perspectives. The government has  initiated radical reforms in the field of healthy lifestyle and  attaches importance to the cooperation with FIFA and other  international partners," the Prime Minister emphasized.

Thanking for the appreciation, the FIFA President noted that he is  visiting Armenia for the first time and is impressed by our country,  its rich history and culture. Gianni Infantino stressed the  importance of linke between sports and education, noting that FIFA  will continue to support Armenia in the development of football  infrastructure, contributing to the programs aimed at the formation  of relevant atmosphere not only in sports, but also in educational  and social directions.

The interlocutors exchanged views on the cooperation agenda. The  issue of construction of a national stadium was touched upon. The  Prime Minister noted that the construction of a national stadium in  accordance with international standards is one of the priorities of  the Government, and some work is being done in that direction. The  FIFA President stressed the importance of the infrastructure of such  a scale in terms of the country's sports reputation, noting that FIFA  with its tools will support the process as much as possible. In this  context, FFA President Armen Melikbekyan presented the work done so  far.

On behalf of FIFA, Gianni Infantino presented the Prime Minister of  the Republic of Armenia with a nominal T-shirt and a nominal ball of  the 2022 FIFA World Cup