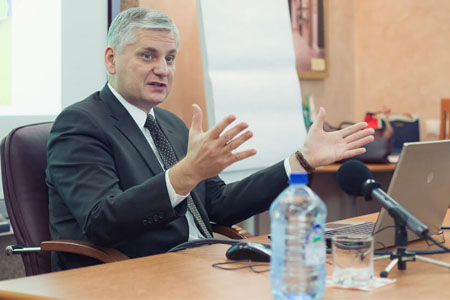 ArmInfo. The European Union (EU) is seeking independent activities in the settlement of the Armenian-Azerbaijani conflict Sergey Markedonov, Leading Researcher  at Moscow State Institute of International Relations (MGIMO), said in  an interview with ArmInfo.

"Brussels failed to accomplish the set task by itself either in the  Balkans or in Ukraine. The USA's interference was needed in both  cases. This is the reason for the EU's desire to show its own ability  to settle conflict at least in the South Caucasus. And Brussels  obviously has its own motives for and interests in it, which are, no  doubt, in conflict with Russia's interests," Mr Markedonov said.

The launch of Russia's special operation in Ukraine triggered  activities only on the part of the EU in the South Caucasus.  Specifically, Brussels is now actively involved in preparing border  delimitation and demarcation and a peace agreement between Armenia  and Azerbaijan. Certain processes got underway in Transdniestria, and  Tbilisi's refusal to support the anti-Russian sanctions caused  problems in the Georgian - Ukrainian relations.

"In other words, the Caucasus agenda is part of the Black Sea  geopolitical agenda - and it is extremely important. By and large,  the EU not being interested in Russia growing stronger does not give  rise to any questions. Rather, what causes questions is the EU's  desire to 'skim the cream off' Moscow's previous steps to establish  peace in Karabakh. The very same President of the European Council  Charles Michel prefers pretending that Russia is not at all involved  in Karabakh, whereas it was Russia that ended the war and ensured the  trilateral agreements to establish peace in the South Caucasus.  Moscow and Brussels are not in outright confrontation with each other  over Nagorno-Karabakh in contrast to that over Georgia and Ukraine.  They are just trying to ignore Russia," Mr Markedonov said.