Forecast: The limits of tactical cooperation between Turkey and  Russia depend on the ability of Ukraine to defend its interests 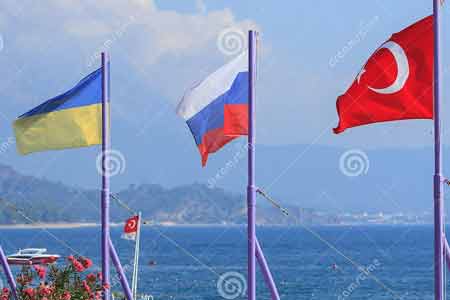 ArmInfo.The strategic support provided by Turkey to Ukraine does not at all mean that Ankara is ready to abandon tactical cooperation with Moscow. How far this  cooperation can go depends largely on whether Ukraine learns to  defend its national interests as uncompromisingly as Turkey is doing  now, the columnists of the eurointegration.com.ua website write.  "Calls for the lifting of sanctions against Russia, accusations  against the West of facilitating the prolongation of the war and  undisguised support for Russian companies in circumventing sanctions  - all this is about today's Turkey.  Against this background,  generating benefits from the development of economic cooperation with  Moscow and justifying this with the position of an "equidistant"  intermediary in relations between Ukraine and Russia, Ankara is  trying to maintain partnership relations with Moscow and Kyiv, at the  same time earning domestic political points on this," the authors of  the article note.

On the eve of the parliamentary and presidential elections in Turkey  scheduled for June 2023, Recep Tayyip Erdogan, against the background  of significant economic and political problems in the country, has a  recipe for victory, the implementation of which directly depends on  Russia. Namely, in the opportunity to replace the lost European  markets for Russia, in which Ankara sees a recipe for a quick  economic recovery.  In the first quarter of 2022, the volume of  Russian-Turkish trade doubled, reaching a record high of $14 billion.

Similarly, according to the authors of the article, things are in  foreign policy. And at a press conference with Lavrov, Cavusoglu  outlined three areas that allow Turkey to remain a powerful political  player of the "first echelon" in the region. These are mediation in  peace negotiations between the Russian Federation and Ukraine, the  settlement of the situation in the South Caucasus, a cross-border  operation in Syria in order to establish a "security zone" where part  of the Syrian refugees can be returned. The success of all three  provisions depends on Turkey's ability to negotiate with Russia.

Such changes in Turkey's foreign policy, which are problematic for  NATO, carry even greater risks for Ukraine. In a situation where  Ankara has already become a mediator in the peace talks between  Russia and Ukraine, the greatest risk for Kyiv may be a situation  where the mediator, instead of a fair solution to the conflict, will  first of all try to solve its own problems by continuing it. And this  is in a situation where the West is unlikely to be able to help  Ukraine - it itself has considerable problems with Turkey, which will  only get worse.

According to the authors of the article, such a "four-handed" game,  carries considerable risks for Ukraine, which has already faced an  extremely difficult challenge: how to show Ankara its "red lines"  without ruining relations with a difficult, but certainly important  ally, considering that an acute conflict between Kyiv and Ankara  would be a real gift for Moscow. Meanwhile, deliveries of Bayraktars,  restraining the strengthening of the Russian navy presence in the  Black Sea and participation in humanitarian initiatives still make  Ankara an indispensable partner for Kyiv.

"On the other hand, Kyiv cannot afford not to react to the same  operations of a strategic partner with stolen Ukrainian grain. In  turn, self-confidence in the absence of consequences for Turkey of  such an ambiguous policy is added by the awareness of its unique role  as a country holding the keys in its hands to the Bosphorus for  Russian ships and to the NATO for new potential members of the  Alliance. In turn, maintaining partnership with sovereign Ukraine is  of critical importance for Ankara. Given that the strengthening of  Russia's presence in the southern regions of Ukraine and, as a  result, the transformation of the Black Sea into the sphere of  Russian influence carries direct threats to Turkey itself," the  authors of the article sum up.