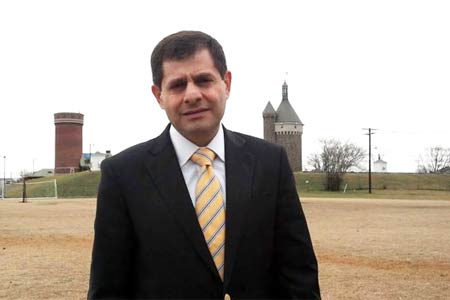 ArmInfo.The U.S. not being immediately involved in the launching of the first Armenian satellite to orbit by means of the SpaceX carrier by no means plays down the  psychological significance of the event, Armenia's former  vice-ambassador to the USA Armen Khazaryan said in an interview with  ArmInfo.

"All the previous Armenian administrations had opportunities both to  launch satellites to orbit and to develop nuclear potential using  U.S. technologies. But they either failed or refused. And we can see  Armenia's incumbent administration is succeeding step-by-step, and  Armenia has made its first - and critically important - step toward  realizing the potential of its relations with the United States," he  said.

Although the step was made with a 30-year delay, it is evidence that,  with political will displayed, it could produce results. Ensuring  energy self-sufficiency and security has been a major development  challenge facing Armenia over the last few decades, and nuclear power  engineering is the cornerstone of ensuring this security,  particularly the Metsamor nuclear power plant, which met 40% of  Armenia's energy needs in the past.

The Armenia-U.S. nuclear power and security cooperation - at both the  bilateral and international levels within the International Atomic  Energy Agency (IAEA) - has been rather effective since the late  1990s, particularly, in the context of the U.S. and IAEA assistance  in ensuring safe operation of the Armenian NPP based on the  non-proliferation treaty. And the U.S.-Armenia Memorandum of  Understanding Concerning Strategic Civil Nuclear Cooperation (NCMOU)  proved to be a crucial step toward developing this cooperation.

"Without implying any national or international commitments, the  document sums up the intentions and defines the legal framework for  nuclear power cooperation, which is the most significant result of  Armenian Foreign Minister Ararat Mirzoyan's visit to the United  States. I think the USA's involvement in constructing a new NPP in  Armenia is possible, especially in the context of the intentions to  cooperate in developing new nuclear power generating units and  training of nationals," Mr Khazaryan said.