Analyst: The geopolitical value of Syunik has increased significantly 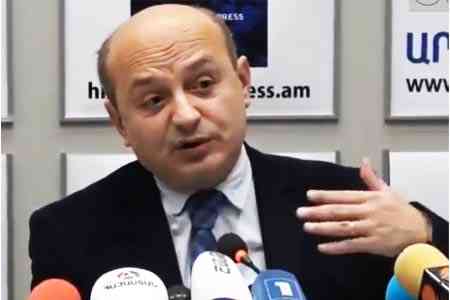 ArmInfo.The geopolitical significance and value of the Syunik region of Armenia has increased significantly. As of today, this importance has increased even more  than we could imagine it yesterday. A similar opinion was expressed  to ArmInfo by  head of the Armenian Institute of International  Relations and Security Stepan Safaryan.

"Such significance is attached to Syunik by its geographical and  mainly geopolitical and geo-economic location, as in thecase of  Ukraine. It is in Syunik that geopolitical vectors and arrows of  various centers of power intersect as of today. The West is  interested in Syunik, which is clearly manifested in the frequent  visits to the region by the US ambassador and other diplomatic  missions," he said.

In this light, according to Safaryan, Russia's desire to settle and  gain a foothold at this geopolitical crossroads, primarily through  the implementation of the provisions of the tripartite statement of  November 9, 2020, is quite understandable. Another "signator" of this  statement, Azerbaijan, represented by Aliyev, is consistently trying  "to sell" the so called "Zangezur Corridor" wherever possible,  because he is well aware of its real value.

The analyst considers the recent meeting of the CSTO Parliamentary  Assembly in Yerevan on a par with the current geopolitical realities  with the participation of Armenia. In his opinion, the decision to  hold the meeting in Yerevan was not coincidental. And first of all,  it was necessary for the Russian Federation and not least for  Belarus.

According to Safaryan, the Ukrainian crisis is forcing Russian  diplomacy to intensify in all areas. By means of which Moscow is  trying to break out of its own political isolation. At the same time,  in his opinion, the current foreign policy of the Russian Federation  is more conservative than attacking. In other words, its main goal is  to maintain at least the existing positions, including in Armenia and  the South Caucasus.

"Such a state of affairs in international relations for Armenia and  other countries of a similar caliber contains considerable  difficulties and problems. Armenia is forced to make a choice of a  strategic nature, respectively, of importance. In response, Yerevan  is forced to try to remain in a position of strategic balance,  refraining from the compulsion of choice, including through the  diplomatic activity of the Ministry of Foreign Affairs, aimed at  this, the level of which I have recently assessed quite positively,"  the analyst summed up.