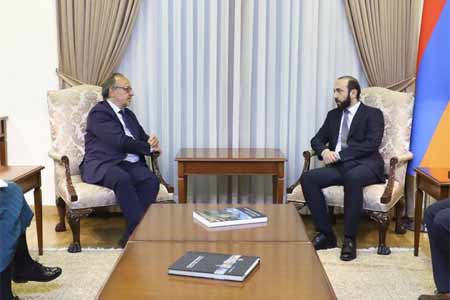 ArmInfo. Protecting the Armenian cultural and religious heritage and preventing changing their identity in the territories under Azerbaijan's control since the end  of the 44- day war is among Armenia's priorities, Armenia's FM Ararat  Mirzoyan stated at his meeting with Mr.  Valery Freland, Executive  Director, International Alliance for the protection of heritage in  conflict areas (ALIPH).

Mr Mirzoyan stressed that there is a threat of complete destruction  of 21,000 museum pieces and over 2,000 pieces of Armenian culture.

The minister stressed a need for immediate interference of UNESCO to  prevent further vandalism against Armenian monuments in  Nagorno-Karabakh, which are part of world cultural heritage.

The sides discuss the ALIPH work to record the Armenian cultural and  historical monuments in Tavush and Syunik and digitize the records,  as well as further programs.

The International alliance for the protection of heritage in conflict  areas (ALIPH) is the main global fund exclusively dedicated to the  protection and rehabilitation of cultural heritage in conflict zones  and post- conflict situations. It was created in 2017 in response to  the massive destruction of cultural heritage over the past decade,  predominantly in the Middle East and the Sahel. ALIPH is a  public-private partnership assembling several countries and private  donors. Based in Geneva, this Swiss foundation also benefits of the  privileges and immunities of an international organization, thanks to  a headquarters agreement signed with the Swiss Confederation. To  date, ALIPH has supported more than 150 projects in 30 countries (for  instance, Iraq, Yemen, Mali, Afghanistan, Sudan, Libya, North-East  Syria) on 4 continents. ALIPH finances concrete projects carried on  on the ground, hand in hand with local partners, authorities, and  communities. The ultimate goal is that cultural heritage protection  contributes to peace and sustainable development.

Back on November 20, 2020, UNESCO Director-General Audrey Azoulay    announced the readiness of the organization to send a mission to   Karabakh to help restore the cultural and historical heritage of the  region. And already in December of the same year, Assistant   Director-General of UNESCO Ernesto Ottone noted that the organization   "so far is only waiting for Azerbaijan's response so that UNESCO can  continue to work with sending a mission." In turn, the Azerbaijani   Foreign Ministry, in a communique issued on December 22, 2020, called   on UNESCO not to politicize the issue of protecting cultural heritage  in Karabakh and stated that Baku "is open to a constructive dialogue   to discuss the details of organizing the mission."

The Russian Foreign Ministry has also repeatedly stated that Moscow  is counting on the visit of a UNESCO mission to Nagorno-Karabakh in  the near future. However, the issue is deliberately delayed by the  Azerbaijani side and against this background, in the territories of   Nagorno-Karabakh, which have come under the control of Azerbaijan,   acts of vandalism are being committed, Armenian cultural and   historical monuments are being destroyed, and the identity of the   monuments is being falsified.