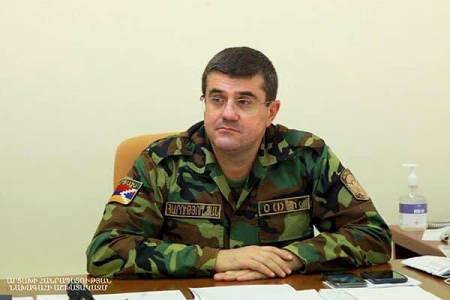 ArmInfo. In response to a written appeal sent on May 24 to the president of the republic from political parties represented in the country's parliament, President  Arayik Harutyunyan convened an expanded meeting of the Security  Council on May 25.

According to the press service of the NKR leader, Harutyunyan  stressed that the wording about ensuring "the rights and security of  the ethnic Armenian population of Karabakh" in the statement of the  President of the European Council Charles Michel is extremely  unacceptable for the people and authorities of Artsakh.  The head of  state noted at the same time that it does not reflect the demands and  aspirations of the Armenians of Artsakh, clearly voiced to the  international community over the past thirty years and based on the  right of peoples to self-determination.

According to Harutyunyan, he had the opportunity to meet with the RA  Prime Minister and discuss the Pashinyan-Aliyev meeting held in  Brussels on May 22. In this regard, he would like to reaffirm that  the exclusive right to decide the fate and status of Artsakh belongs  to the people and authorities of Artsakh.  According to the  president, Prime Minister Pashinyan emphasized that no one can and is  not going to sign any document behind the backs of the people of  Armenia and Artsakh. If there is a specific proposal for specific  solutions, then it will be discussed with the authorities of Artsakh,  and the public will be duly informed about it.

Harutyunyan emphasized that the Republic of Artsakh is steadily  following the path of international recognition of independence  through the full and unconditional realization of the right of its  people to self- determination, and the proper provision of the rights  and security of the people of Artsakh is possible only outside of  Azerbaijan.

It should be noted that in the statement of the head of the European  Council following the meeting with the leaders of Armenia and  Azerbaijan on the issue of transport communications, it is noted that  the leaders agreed on the need to start unblocking transport  communications. "They agreed on the principles governing transit  between western Azerbaijan and Nakhichevan and between different  parts of Armenia through Azerbaijan, as well as international  transportation through the communication infrastructure of both  countries. In particular, they agreed on the principles of border  management, security, land fees, as well as customs rules in the  context of international transportation. In the coming days, the  vice-premiers will continue this work," Michel said.  Charles  Michel's statement does not say anything about the status and future  of Nagorno-Karabakh.  Moreover, in his statement, the head of the  European Council, instead of the generally recognized term  Nagorno-Karabakh, used the Azerbaijani term "Karabakh" and the  wording "Armenian ethnic population of Karabakh." In addition, his  statement does not mention any trilateral agreements at the level of  the leaders of Armenia, Azerbaijan and Russia, or other generally  accepted principles of settlement.