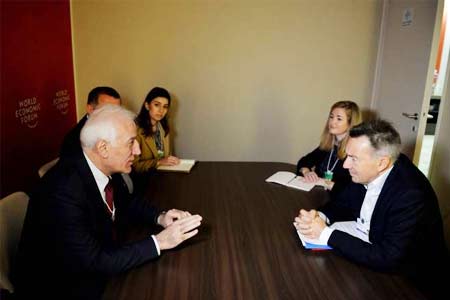 ArmInfo.On the sidelines of the World Economic Forum in Davos, Armenian President Vahagn Khachaturyan met with President of the International Committee of the Red Cross (ICRC) Peter Maurer.

According to the press service of the President of Armenia, during  the meeting Khachaturyan noted the importance of permanent active  cooperation with the ICRC in resolving a number of humanitarian  issues.  The President of Armenia emphasized the need to ensure the  return of Armenian prisoners of war, hostages and civilians held in  Azerbaijan after the 44-day war and the active involvement of the  International Committee of the Red Cross in this issue.

It should be noted that the exact number of Armenian prisoners of war  and civilians held in Azerbaijani captivity is still not known. Baku  officially confirmed that they had 38 prisoners of war, meanwhile,  according to human rights activists, there are several hundred of  them, including women.

The meeting also discussed issues related to  ensuring the continuity of the process of searching for the missing  persons during the Artsakh war.

The President of the International Committee of the Red Cross assured  that the issues raised by the President of Armenia are a priority for  him and are in the field of view of the organization he leads.

Khachaturyan also met with Senior Minister, Coordinating Minister for  Social Policy of Singapore Tharman Shanmugaratnam. The interlocutors  exchanged views on issues of global security and related to improving  the efficiency of the public administration system. It was noted that  there is great potential for cooperation in the areas of high  technology, science and education.

The importance of exchanging experience in various fields and the  need to combine efforts for the effective implementation of reforms  was emphasized.