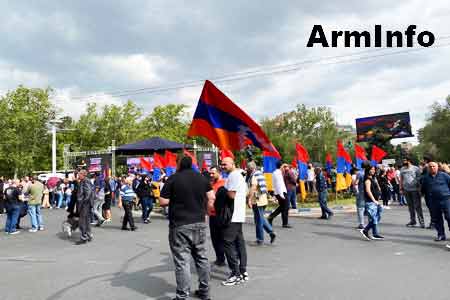 Early this morning they blocked the entrances to the residence of  Armenia's President at 26 Baghramyan Avenue.

Talking to reporters in front of the RA presidential residence,  Vice-Speaker of Armenia's Parliament and Resistance Movement  Coordinator Ishkhan Saghatelyan said that the protesters blocked the  entrances to the Security Council of Armenia as well.

"It is no coincidence as the secretary of the Security Council is one  of the key officials daily justifying all the concessions thee  authorities pledged to make. Any building we are going to block will  remain blocked as long as the people want it to be blocked. The goal  of today's action is clear. On the very first day we stated that the  government agencies not serving the interests of Armenia and of the  Armenian people must be blocked by citizens," Mr Saghatelyan said.

Armenia's president is not responding to the treacherous plans  because he appeared in the residence on this condition and is a  member of their team, he added.

Aram Vardevanyan of the Armenia parliamentary bloc is sure the  Resistance Movement will achieve its goals - "Armenia without Nikol".

"Our task is to draw the attention of as many people as possible for  those not in the streets now to defend Armenia and Nagorno-Karabakh.  We have reached the critical point and are not going to retreat. We  are determined to continue our struggle. If anyone once thought the  Resistance Movement is dramatizing, the latest meeting in Brussels  and the following statement made things clear to everyone. Early this  morning even more people joined the protests than yesterday," Mr  Vardevanyan.

After blocking the buildings for two hours, the protesters marched  toward Franc Square and Mashtots Avenue. The traffic in Mashtots  Avenue and Grigor Lusavorich street has been blocked.